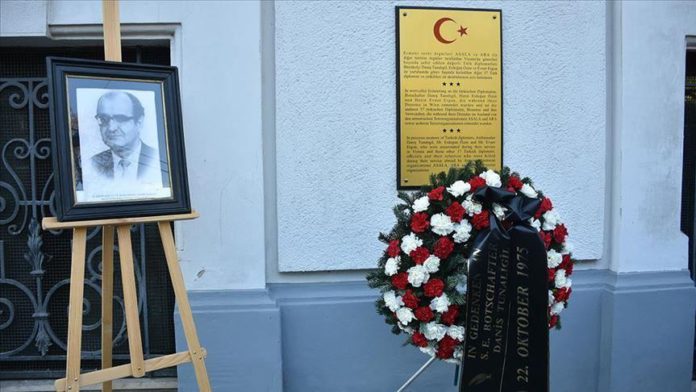 Turkey on Thursday commemorated its diplomat martyred in an Oct. 22, 1975 attack in Vienna, Austria.

“We remember with respect our martyr, Ambassador Danis Tunaligil, assassinated in a heinous attack by the terrorist organizations ASALA [Armenian Secret Army for the Liberation of Armenia] and JCAG [Justice Commandos of the Armenian Genocide] in Vienna on 22 October 1975,” the Foreign Ministry said on Twitter.

Armenian terrorist organizations have martyred 31 Turkish diplomats and family members since the 1970s.

The vast majority of the attacks were conducted by the ASALA and JCAG terrorist organizations.

ASALA, founded in 1975, was the first Armenian terrorist group to wage war against Turkey.

It not only targeted Turkey but also other countries and became infamous for a 1975 bomb attack on the Beirut office of the World Council of Churches.

The JCAG was formed in 1975 in Beirut. However, it is nationalistic, not Marxist-Leninist like ASALA.

Claiming that it only received support from the Armenia diaspora rather than foreign partners, the JCAG only targeted Turkey because it believed that attacking other countries would damage the so-called “Armenian struggle.”

It initially gained notoriety by claiming responsibility with ASALA for the attack on Tunaligil.

US seeks property for Libya embassy