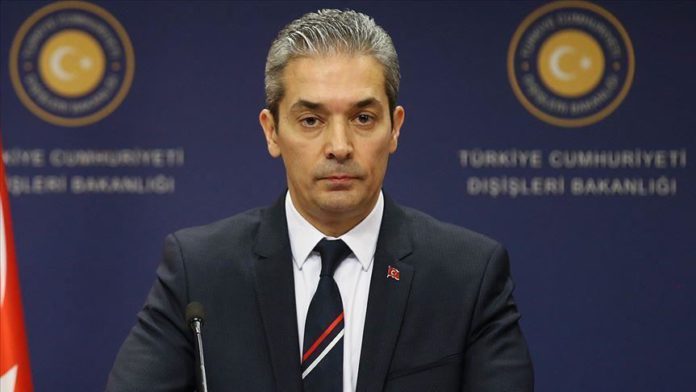 Turkey on Monday commemorated the deportation of Crimean Tatars 76 years ago from their homeland, the Crimean peninsula.

Foreign Ministry spokesperson Hami Aksoy marked the date of May 18, 1944, which is remembered as the anniversary of the Crimean Tatar Turks’ exile.

“76 years ago today (18 May), Crimean Tatar Turks, the indigenous people of Crimea, were forcibly uprooted from their motherland and deported under inhumane circumstances. A large part of 250,000 Crimean Tatars lost their lives either on the way or in exile. Crimean Tatars were not able to return to their motherland, the Crimean peninsula, for decades after the exile of 1944,” Aksoy said in a statement.

The Crimean Tatars were deported to various regions within Soviet territory, in particular Siberia and Uzbekistan. Almost half of the exiles, who endured long months of dire living conditions, are thought to have died of starvation and disease.

“Turkey continues today, as in the past, to support the Crimean Tatar Turks to overcome the unjust treatment to which they have been subjected and to live safely and in peace, preserving their identity,” said Aksoy, also marking the date of May 21, 1864, which is commemorated as the anniversary of the “Circassian Exile” tragedy.

A war in 1864 near the Black Sea port city of Sochi resulted in defeat for the Circassians and saw the Russian Empire invade all of Caucasia, a region extending east from the eastern Black Sea to the Caspian Sea.

In a plight similar to that of the Crimean Tatars, nearly 1.5 million Circassians were expelled from the region to the east of the Black Sea when it was overrun by Russia in 1864. Some 400,000-500,000 are believed to have died.

Most of the Circassian exiles were absorbed into the Ottoman Empire, settling as far away as present-day Jordan.

“We share the pain of our kinsmen, the Crimean Tatars and the brotherly peoples of the Caucasus, respectfully honor their memory and wish Allah’s mercy upon those who lost their lives during these tragic events which have left an indelible mark on our collective memory,” said Aksoy.

The communique further expressed Turkish support for the “territorial integrity of Ukraine.”

Russia and Ukraine have been at loggerheads since Russia annexed Crimea after a controversial referendum.

The US and Turkey, as well as the UN General Assembly, viewed the move as illegal.

Ukraine has also blamed the Kremlin for separatist violence in Donbass, in the country’s east, near its border with Russia, which has claimed some 13,000 lives.

Over 200 terrorists neutralized by Turkey in December