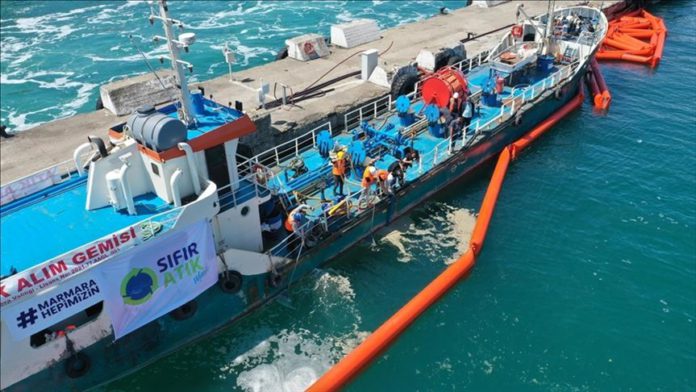 Over the past 11 days, Turkish sea cleaning teams have collected a total of 4,202 cubic meters (148, 392 cubic feet) of mucilage from the Marmara Sea, said the country’s environment and urbanization minister on Saturday.

Updating the state of the works to clear out mucilage, also known as sea knot, Murat Kurum said on Twitter that the operations were conducted in 255 locations.

Noting that the collected mucilage has been sent for disposal, Kurum said the northwestern Yalova province, Istanbul, and the western province of Balikesir are among the cities where most of the mucilage has been cleared.

“In 4,396 inspections we did as of June 18, we imposed total administrative fines of 12.835 million Turkish liras ($1.468 million) on businesses that did not fulfill the required conditions,” he said.

On Tuesday, we will start to work on projects which will increase the level of oxygen in two different locations of the Marmara Sea, Kurum added.

On June 6, Turkish authorities announced a 22-point action plan to clear a surge of mucilage, which covers parts of the Sea of Marmara in the country’s northwest.

The mucilage – mostly accumulated in Mudanya, Gemlik Bay, Gebze and its surroundings, the coastal areas of Istanbul’s Anatolian side, and around the Princes’ Islands – also partially covered the shores of the Sea of Marmara.

The wind dispersed the substance covering the central coast of the northwestern Yalova province to coastal areas of the Cinarcik and Armutlu districts as well as the town of Esenkoy, which are among the major touristic hubs of northwest Turkey.