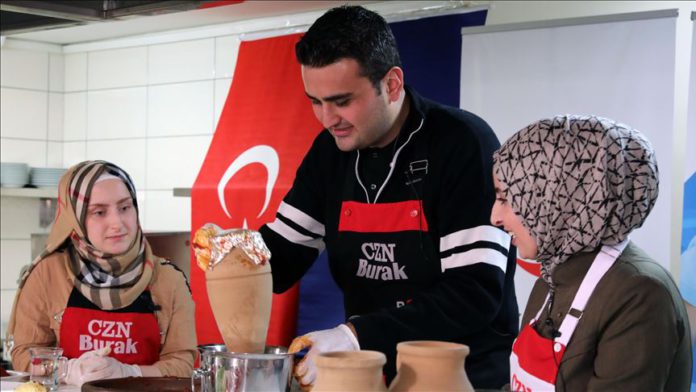 A Turkish celebrity chef with millions of social media followers marked Friday’s World Food Day with the help of two Syrian refugees, by cooking on live TV a meal that is traditional to both nations.

Ozdemir, the owner of several restaurants in Istanbul, spoke before the cooking showcase at a Turkish Red Crescent soup kitchen that serves 1,000 people daily in the city’s working-class Pendik district.

Organized by the Turkish Red Crescent and the International Federation of the Red Cross and Red Crescent (IFRC), the event was livestreamed in Turkish, English, and Arabic on social media.

Around 50 million people watched the Turkish chef and Syrian duo make magic in the kitchen.

A restaurant of her own

Syrian refugees Amal Awat, 29, and Rayan Atr, 18, who both now live in Istanbul, joined Ozdemir, originally from Turkey’s southeastern province of Hatay on the Syrian border, to prepare the traditional testi kebab, a dish known in both Turkey and Syria which is made in an earthenware jug.

Awat, who dreams of opening her own restaurant one day, told of her pleasure at cooking together with Ozdemir on World Food Day.

The mother of three is originally from Syria’s northeastern Al-Hasakah region and has lived in Istanbul for the last seven years.

Awat and Atr are among over 3.6 million Syrian refugees living in Turkey – more than any other country – due to the civil war in their homeland.

Atr, 18, is from Aleppo, northwestern Syria, and has been living in Istanbul for the last five years.

“Living in Istanbul is so lovely but difficult,” said the high-school student, explaining that when she first arrived she had problems due to lacking Turkish.

“But I’m getting used to it,” she said in fluent Turkish.

Atr said that after sharing her cooking experiences on social media, she was very happy to meet and learn more about culinary art from a celebrated chef.

The event aimed to showcase “how food connects us in Turkey – no matter where we come from, the language we speak, food is a common experience,” according to the charity organizer.

This year’s theme for World Food Day is “Grow, nourish, sustain. Together. Our actions are our future,” as the globe works through the novel coronavirus pandemic.

For chef Ozdemir, whose his family originally came from Damascus, Syria’s capital, the event was a pleasure: “We’re all brothers and sisters.”

“We breathe the same air, eat the same bread, share the same place. That’s why cooking with those sisters gives me such singular pleasure.”