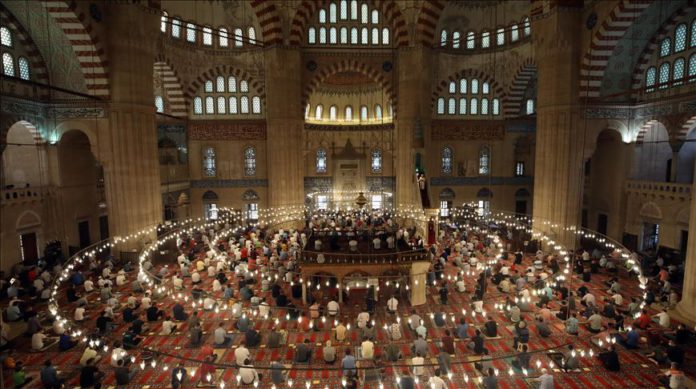 Millions across Turkey on Friday performed special prayers on the first day of the Muslim holiday Eid al-Adha amid protective measures due to the coronavirus pandemic.

In the historic metropolis of Istanbul, Hagia Sophia Grand Mosque, which last week reopened for worship after an 86-year gap, witnessed the first Eid prayers, also known as Salat al-Eid, for the feast of the sacrifice holiday.

Thousands of people joined the prayers lead by Ali Erbas, the head of Turkey’s Religious Affairs Directorate at the historic building.

Giant screens helped the faithful in the back rows feel more connected to the occasion.

Officials in the city’s Fatih district handed out silver-plated commemorative medallions for the Muslim holiday for those who came to Hagia Sophia Grand Mosque.

In the Turkish capital Ankara, prayers were performed in accordance with social distance and hygiene rules.

Disinfectants were placed at mosque entrances, and those who came to mosques wore masks and brought prayer rugs with them.

In a phone call, President Recep Tayyip Erdogan exchanged holiday greetings with soldiers deployed in the southeastern province of Sirnak.

Most majority-Muslim countries around the world, including Turkey, will observe the four-day holiday starting on Friday.

The holiday commemorates the willingness of the Prophet Ibrahim, or Abraham, to sacrifice his son at the command of God, before the last-minute divine substitute of a ram.

Muslims sacrifice animals in commemoration of this intervention and share the meat with the poor and their relatives.