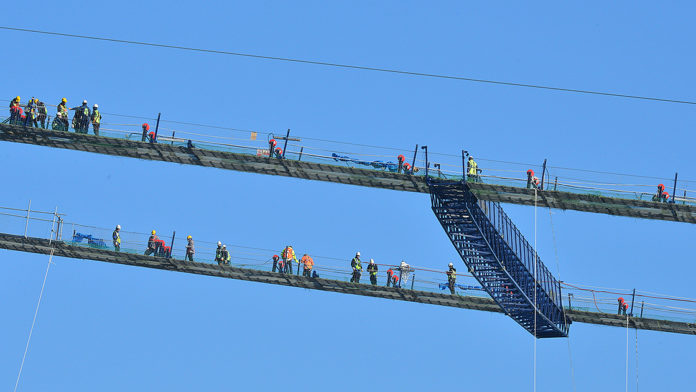 Having surpassed the height of even the iconic Eiffel Tower, the 1915 Canakkale Bridge in northwestern Turkey is well on its way to becoming the world’s longest mid-span suspension bridge.

Set to link Europe and Asia once it is complete, the bridge’s architecture is unique with its colors, figures and completed towers ascending above the Paris landmark’s 300 meters (984 feet) on either bank of the Dardanelles, a strait in the Canakkale province between the Aegean Sea to the south and Sea of Marmara to the north.

Shaped to symbolize an artillery shell as a tribute to the legendary World War I Battle of Gallipoli, the spires will tower 318 meters high, with a mid-span of 2,023 meters, symbolizing the 100th anniversary of the Republic of Turkey’s foundation.

In homage to the Turkish flag, the towers will feature red and white, while the total length of the bridge will reach 4,608 meters.

It will be one of the most important crossroads in the world when finished, with a grand opening slated for March 18, 2022.

Construction has been ongoing since the groundbreaking ceremony was attended by President Recep Tayyip Erdogan on March 18, 2017.