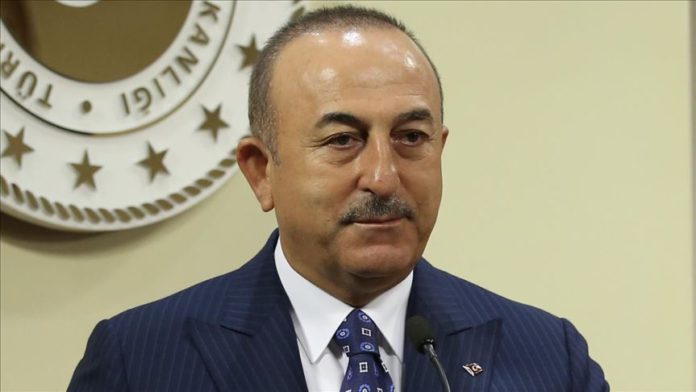 If the bloc wants to negotiate with honesty, Turkey is ready to fulfill any criteria for EU membership, Turkey’s foreign minister said on Tuesday.

Speaking at a joint news conference with Ann Linde, his counterpart fro EU member Sweden, Mevlut Cavusoglu reaffirmed Turkey’s determination for membership, but added that the EU needs to take serious decisions on many issues, including enlargement.

The two top diplomats also spoke on a number of issues, including Upper Karabakh and Syria, as well as bilateral relations, he added.

“We expect more concrete support and cooperation from Sweden in the fight against terrorism,” Cavusoglu said, referring to the activities on Swedish soil of the terrorist groups PKK and FETO.

“Many FETO members applied for asylum in Sweden and unfortunately they were accepted,” he said, adding that the PKK must also be opposed when it uses the SDF and YPG/PYD labels.

On July 15, 2016, the Fetullah Terrorist Organization (FETO) and its US-based leader Fetullah Gulen orchestrated a defeated coup in Turkey which left 251 people martyred and nearly 2,200 injured.

In its more than 30-year terror campaign against Turkey, the PKK – listed as a terrorist organization by Turkey, the US, and EU – has been responsible for the deaths of 40,000 people, including women, children, and infants. The YPG/PYD is PKK’s Syrian offshoot.

Turkey supports Azerbaijan both on the field and on the table

On recent clashes between Azerbaijan and Armenia, Cavusoglu said that the world should call on Armenia to retreat from occupied territories.

“In addition to the cease-fire call, if there was a call for Armenia to retreat from Azerbaijani lands, then we could really see the desire of the international community to resolve this issue,” he noted.

The failure to reach a peaceful solution has encouraged Armenia to launch new attacks on civilians in Azerbaijan, he added.

He reiterated that a permanent solution to the conflict is only possible with the retreat of Armenia from occupied Azerbaijani lands.

“We have said and now say [again] that we support Azerbaijan both in the field and on the negotiation table under any circumstances,” Cavusoglu said.

A humanitarian truce was declared on Saturday for the exchange of prisoners and retrieval of bodies from both sides in Upper Karabakh, also known as Nagorno-Karabakh, an internationally recognized territory of Azerbaijan.

Despite the cease-fire, Armenian forces launched a missile strike on Azerbaijan’s second-largest city, Ganja – an area far from the front line – leaving at least 10 people dead and 35 wounded, including women and children.

Speaking on Turkish-EU relations, Linde said that the EU seeks to have good relations with Turkey, adding: “Trade with Turkey is an important issue for all of us.”

She added that they applaud Turkey’s efforts for Syrian refugees as well as efforts towards the EU membership.

Noting that Sweden and Turkey do have several areas of disagreement, she said that in the field, everyone should have a dialogue with different actors on various issues as part of the coalition against Daesh/ISIS.

About the SDF – a group Turkey says is another name used in Syria by the YPG/PKK – she claimed the group is different from the terrorist PKK and has not been recognized as a terror group by the international community.

Asked by reporters about the conflict between Azerbaijan and Armenia, she said any solution must come through negotiations.

She pointed to the importance of the OSCE Minsk Group for solving the Upper Karabakh issue, and said the parties should sit at the negotiating table.

Turkey has criticized the Minsk Group for decades of inaction over the issues.

Criticizing Linde for urging Turkey to “retreat from Syria” – where Turkey has launched cross-border operations against terrorists and to protect the local population – Cavusoglu said that this is not a correct diplomatic approach.

“With what authority did you ask Turkey to retreat from Syria or warned Turkey in this regard?” he asked.

Citing the EU’s silence on Greece’s mistreatment of migrants – as documented by the media and decried by human rights NGOs – he said this is an example of the bloc’s double standards.

Also touching on Linde mentioning the “situation of minorities” in Turkey, Cavusoglu called for the voices of other minorities – including Christians and Kurdish groups abused by PKK and its branches – to be listened to.

“Why do you see the PKK as ‘Kurds’ while ignoring other Kurdish people?” he asked.

Turkey has long decried the terrorist PKK’s mistreatment of Kurds while falsely claiming to commit terror acts in their name.

Cavusoglu stressed that Turkey was “deeply saddened” by the “heinous acts” against the Muslim holy Quran committed in Sweden this August by members of far-right, anti-Islamic political party from neighboring Denmark.

He underlined that Turkey was also pleased with the measures taken by Swedish authorities, especially against “extreme racist” politicians, and the statement made by Prime Minister Stefan Lofven on this issue.

“This is an illness, a disease, as dangerous as terrorism, so we can overcome it if we fight it together,” he said.

Cavusoglu also said Turkey is ready to work together to fight forces which seek to shake all the values that unite Europe and humanity.