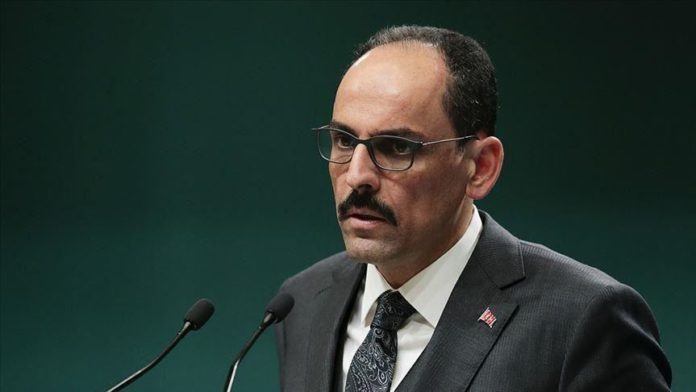 Turkey expects the EU to be an “honest broker” to diffuse the tension in the Eastern Mediterranean, the presidential spokesman said on Thursday.

Speaking at the virtual roundtable organized by European Council on Foreign Affairs (ECFR) titled Turkey’s Role in the Eastern Mediterranean: Threats of Conflict and Prospects for Dialogue, Ibrahim Kalin stressed the issues between Turkey and Greece should be resolved on the basis of “a fair, equitable and transparent process of negotiation.”

“We believe we can resolve these issues through negotiation,” Kalin said.

Turkey is the country with the longest coastline in the Mediterranean. Citing this, Kalin said: “As a NATO member, of course what happens in the Eastern Mediterranean is of concern to us, not only bilaterally say with Greece or Cyprus or say Lebanon, but as a whole.”

Speaking on the history of exploratory talks between Turkey and Greece to give a better insight into the tension between two countries, he said: “Exploratory talks began in 2002, and we had 60 rounds of talks until 2016.

The senior official said that the exploratory talks halted in 2016 due to a number of domestic political issues that Greece’s Syriza government was facing at that time.

“But it didn’t happen. So, the Germans stepped in, provided their good services. And we have been lucky and grateful to the Germans for doing this,” Kalin said, adding the talks with German mediation focused more specifically on the maritime issues and hydrocarbon energy activities in the Eastern Mediterranean.

Turkey has sent out drill ships to explore for energy on its continental shelf, citing that Ankara and the Turkish Republic of Northern Cyprus (TRNC) have rights in the region.

Turkey’s presidential spokesman criticized those who accuse Turkey of “acting unilaterally and aggressively” or “assertively,” describing such comments as “unfair.”

“But to be fair. It was not Turkey that began giving licenses in either the Eastern Mediterranean or around Cyprus,” Kalin said.

“It was in fact first the Greek Cypriots — after they were accepted into the EU as a full member in 2004 and after they rejected the Annan Plan — that began giving licenses to a number of companies around the islands in the areas, which were disputed, which completely denied the rights of the Turkish Cypriots,” he added.

Ankara has said energy resources near Cyprus must be shared fairly between the TRNC – which has issued Turkish state oil company Turkish Petroleum a license — and the Greek Cypriot administration.

Also, Kalin recalled that the Greek Cypriot administration signed a number of agreements with Egypt, Lebanon and Israel between 2007-2016, which, he says, “total rejection and denial of the rights of the Turkish Cypriots.”

“Some of the actions by either Greece or the Greek Cypriots have gone beyond the reasonable limits of maritime boundaries in the Eastern Mediterranean,” he added.

Turkey had a number of talks and meetings with EU officials and Germany, Kalin said, adding some EU members have issues with Turkey: “I will mention here, France, for example, with its attitude over the last year or so, especially in regards to both Syria and Libya.

“In our assessment, countries like that are fighting another battle with Turkey, but simply using the current crisis in the Eastern Mediterranean, to feel more anti-Turkey sentiment.”

Kalin said that talking about sanctions on Turkey is not helpful to either resolving the issues or to the EU’s image as an honest broker.

“Anyone who knows Turkey should know that those kinds of sanctions or talks or blackmailing will never work against Turkey,” he said.

“We call for a fair, equitable and transparent process of negotiation in the Eastern Mediterranean, and we believe we can resolve these issues through negotiation,” he added.

Turkey gives a chance to diplomacy

Reminding that Oruc Reis — Turkish drilling vessel exploring energy in the Eastern Mediterranean – has returned to the Antalya port, Kalin said that Turkey has given a “major chance” to diplomacy again, as it did two months ago, which Greece responded with a maritime deal with Egypt.

Meanwhile, Kalin said that any dispute between two countries on maritime issues should be resolved bilaterally first, according to the international maritime law, then the third parties or other courts come in.

These exploratory talks take a very long time, he added, showing the border deal between Russia and Norway as an example, which took 40 years for both countries to come to an agreement.

“There should not be an expectation of resolving these issues in three months or in five years. I think we just have to be realistic,” he added.

“Is that a fair or realistic demand?” he asked. “It’s not, everybody says that no. This is a maximalist claim.”