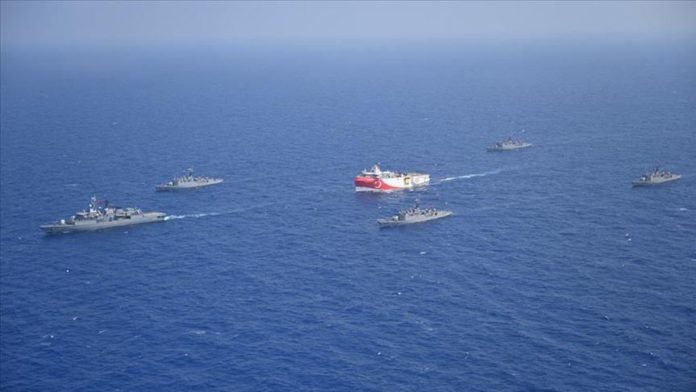 In the face of efforts by Greece, the Greek Cypriot administration and Egypt to limit Turkey into its mainland, Ankara has announced it would respond by continuing exploration activities in the Eastern Mediterranean with its seismic research vessel, the MTA Oruc Reis.

Turkey has accused Greece of trying to block it in the Aegean Sea and the Eastern Mediterranean by signing agreements with the Greek Cypriot administration, Egypt, and Israel.

Reaffirming that it would continue protecting its legitimate interests via diplomatic and military means, Ankara has said the Oruc Reis would conduct research in the region until Aug. 23.

Turkey’s Foreign Ministry shared a map Monday showing the areas in its continental shelf and Exclusive Economic Zone (EEZ) where the Oruc Reis would be active.

Thus, Turkey showed in the field that the Greek-Greek Cypriot plan was void and that the so-called contiguous maritime jurisdiction areas, which aim to surround the Anatolian peninsula, were invalid.

Ankara, therefore, gave the message that it would protect the contact between Turkey’s and Libya’s continental shelves, which Greece and Egypt sought to cut off with their agreement.

Hoping to expand its zone of interest, Egypt had signed an agreement with the Greek Cypriot administration in 2003 to mark its maritime jurisdiction.

However, Cairo would not have lost 11,500 square kilometers (3,352 square nautical miles) it left to the Greek Cypriot administration if it had foreseen Turkey’s policy to draw a midline on the sea.

Likewise, it would also have retained 6,000 square km (1,780 square nautical miles) from Greece, had it agreed with Turkey and Libya.

Athens’ disputes with Turkey have continued for many years in the Aegean Sea and Eastern Mediterranean.

Greece claims that even its smaller islands that span the Aegean and Eastern Mediterranean — many of which are only a few kilometers from Turkey’s mainland — project maritime rights and have a continental shelf.

However, it compromised its claims in its agreement with Egypt, restricting the continental shelf of the islands that it traditionally defended.

It thus refuted its own claims that the continental shelves of the islands could be restricted.

The Greek administration had also previously agreed to limit the continental shelves of some of its islands in the Ionian Sea agreement in a similar treaty with Italy.

While Ankara continues to defend its legitimate interests in the Eastern Mediterranean through diplomatic and military activities, it calls on the international community, especially the countries in its region, to enter comprehensive dialogue-based cooperation.

On Monday, Turkey’s President Recep Tayyip Erdogan said in a statement that the country was always ready to fairly resolve conflicts through dialogue.

Erdogan also called on Mediterranean countries to cooperate in finding “an acceptable formula that protects the rights of all.”

“No way Turkey would consent to any initiative trying to lock the country to its shores, ignoring the vast Turkish territory,” he said.