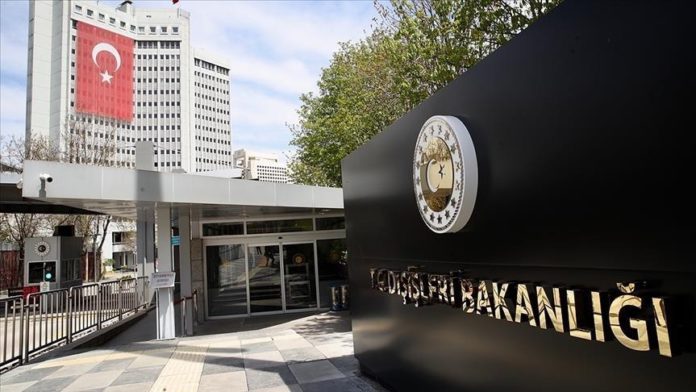 The ministry criticized “allegations made by some NGO reports, which are of dubious reliability” and based on “unfounded assumptions.”

It is designed as a “broad-based” plan to strengthen rights protections, individual freedoms and security, judicial independence, personal privacy, transparency and property rights as well as protect vulnerable groups and enhance administrative and social awareness of human rights.

Regarding US claims of using child soldiers in armed conflicts, “we completely reject the allegations that ascribe responsibility to Turkey,” it said.

Washington on Wednesday added Turkey and 15 other countries to the Child Status Protection Act (CSPA) list — a designation included in the State Department’s annual Trafficking in Person (TIP) report that ranks countries in various tiers in accordance with their efforts to eliminate trafficking.

“Turkey is a party to major international resolutions on the protection of children’s rights, including those adopted by the UN, and its track record on the matter is spotless,” said the ministry.

Referring to the US report as “the most striking example of hypocrisy, double standards,” the Foreign Ministry cited the US’ “open support, weapons aid to the PKK-PYD-YPG terrorist organization, which forcibly recruits children in terror acts in Syria and Iraq.”

It also referred to UN Special Representative for Children and Armed Conflict Virginia Gamba’s report on June 21, saying it underlines the “so-called ‘Syrian Democratic Forces’, under the directives of the terrorist PKK/YPG, committing many violations and serious crimes such as forcibly recruiting children, kidnapping, deprivation of liberty, and use of schools for military purposes.”

“Despite this, the fact that no reference is made to this organization (SDF) in the (US) report is another oddity,” it said.

Saying that “ignoring serious crimes committed by this separatist terror organization (PKK/YPG), which the US has partnered with in Syria, provided training and weapons,” the statement noted that “abducting and giving weapons to children not only in Syria but also in many parts of Iraq including Mahmur and Sinjar” by the PKK/YPG terrorists was also ignored in the US report.

“Making such baseless accusations against its ally Turkey, in which it cooperates closely on many regional issues, is a grave contradiction and is never acceptable,” it said.

Turkey vowed to “resolutely continue its efforts to prevent the crime of human trafficking,” in line with conventions it follows.

The CSPA prohibits the issuance of licenses for direct commercial sales of military equipment to listed countries, apart from preventing them to be included in several US programs, including International Military Education and Training, Foreign Military Financing, Excess Defense Articles and Peacekeeping Operations.