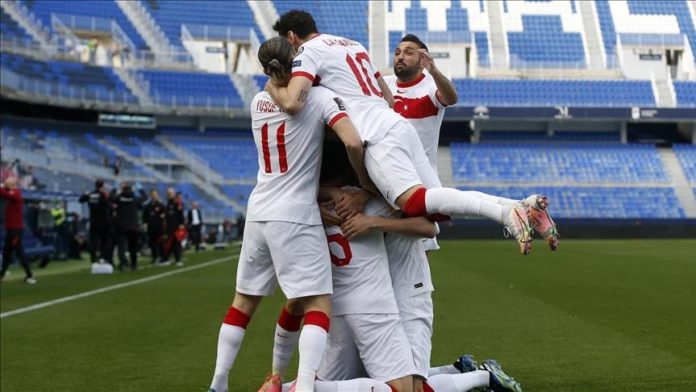 The Turkish national team maintained their impressive start to the European Qualifiers for the 2022 FIFA World Cup after hammering Norway 3-0 on Saturday.

Turkey’s Ozan Tufan gave the visitors a 1-0 early lead in the fourth minute at the La Rosaleda stadium in Spain’s Malaga.

Caglar Soyuncu doubled the lead with a header from a corner in the 28th minute and the first half ended 2-0.

Tufan scored his second goal with a superb long-range strike in the 59th minute to make the score 3-0.

In the 80th minute, the home side midfielder Kristian Thorstvedt was shown the red card following a serious foul play against Caner Erkin.

After starting the qualifiers with a 4-2 win over the Netherlands on Wednesday, Turkey secured their second win and collected six points in Group G so far.

In the other Group G games, the Netherlands beat Latvia 2-0, while Montenegro defeated Gibraltar 4-1.

In a post-game interview, Turkey’s manager Senol Gunes said he is proud of the team’s game and his players were smart, disciplined and patient against Norway.

“We played against the strong team, Norway, and we beat them. We are happy. We won and we did everything right.”

“We knew the strengths of our opponent. We took good advantage of their weaknesses,” said Gunes.

He added that the successful counter attack plan turned the game in Turkey’s favor.

Turkey’s president congratulated the team for their victory.

“I congratulate all our footballers. This was a very sharp team. It is really very good, you gave the lesson of team football,” he said.