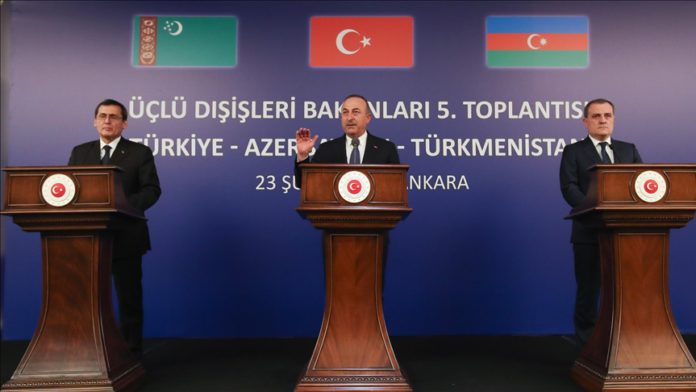 A trilateral mechanism between Turkey, Azerbaijan and Turkmenistan has made significant contributions to the prosperity and stability of the region, the foreign minister of Turkey said on Tuesday.

“Our relationships built on special bonds have turned into a comprehensive partnership today. This trilateral mechanism, which we initiated in 2014, has made a significant contribution to the prosperity and stability of the region,” Mevlut Cavusoglu said at a joint press conference with his Azerbaijani and Turkmen counterparts.

Underlining that the meeting had been fruitful, Cavusoglu said the delegations reviewed the steps they had taken so far and voiced important ideas and proposals for the future.

He stressed that Turkey wants to work closely with Azerbaijan and Turkmenistan as part of its Asia Anew initiative.

Turkey launched the initiative in 2019 to improve ties with Asian countries in different areas.

The ministers also discussed and determined a roadmap for an upcoming trilateral summit of the presidents of the three countries to be held in Turkmenistan, he added.

During the press conference, Cavusoglu also spoke about the “brutal competition” across the world for COVID-19 vaccines.

“We will continue our solidarity as three sister countries, while continuing our common struggle,” he said.

Azerbaijan’s Foreign Minister Jeyhun Bayramov said they also had the chance to separately discuss bilateral relations between Azerbaijan and Turkey.

“Azerbaijan-Turkey relations are developing at the highest level in all areas,” he said, adding that bilateral ties continue to grow stronger by the day under the leadership of the two countries’ presidents.

Bayramov underlined that his country felt the “political and moral support” of the Turkish leadership and nation during the recent 44-day war with Armenia over the occupied Karabakh territories.

The clashes that erupted on Sept. 27 last year ended with a Russian-brokered truce nearly six weeks later. Baku liberated several strategic cities and nearly 300 settlements and villages from Armenian occupation in that period.

“This support gave us extra strength and morale,” he said.

Rashid Meredov of Turkmenistan hailed the trilateral gathering as a “historic meeting,” noting that Turkey and Azerbaijan have always supported Turkmenistan’s initiatives in the international arena.

He emphasized that the three “brotherly” countries share a common culture, history, language, and civilization, adding that the officials discussed ways to deepen cooperation in these areas.

Experts will also work on furthering cooperation between Turkmenistan, Turkey and Azerbaijan in energy, transportation, technology, trade and other fields, Meredov added.