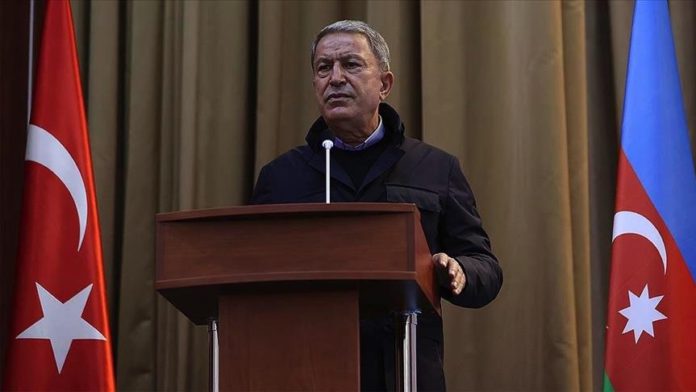 Turkey and Azerbaijan working together to help ensure peace in newly liberated Karabakh is a boon to the region’s future, said Turkey’s national defense minister on Thursday.

“The association of Turkey and Azerbaijan in ensuring peace and stability, togetherness, working shoulder to shoulder really only promises great things for the future, not just for today,” Hulusi Akar said in the Azerbaijani capital Baku, meeting with the nation’s president, Ilham Aliyev.

“Hopefully, in the days to come, this work will continue with one heart, one wrist, one fist,” Akar added, speaking alongside top Turkish military commanders.

“The first was your speech on Nov. 10. It was a true victory speech,” he said, referring to Aliyev’s speech on the day a Russian-brokered cease-fire was signed with neighboring Armenia.

Turning to the Minsk Group – a group of three countries tasked with working to solve the Karabakh crisis, but criticized for inaction – he added that the second came when he had the pleasure to hear “the answer you gave to those who did not speak about the occupation for 30 years and came here and remembered that they were representatives of the Minsk group.”

Pointing to the Karabakh victory as a key moment in the history of the Caucasus, Akar also spoke on a new corridor crossing Armenian territory to connect Zangilan in Azerbaijan with the Nakhchivan Autonomous Republic.

“It is important to establish this line between Nakhchivan and Zangilan following the establishment of this joint center as soon as possible for this victory to be crowned,” he said.

Akar also highlighted the importance of “physically” uniting Turkey, Azerbaijan, and the Nakhchivan Autonomous Republic, something more possible in the wake of the victory in Karabakh.

Following the Nov. 10 truce, Turkey and Russia signed a memorandum of understanding to set up a joint center to monitor the peace deal on Azerbaijani territories liberated from Armenia’s occupation.

Aliyev has said the center will be established in the city of Aghdam.