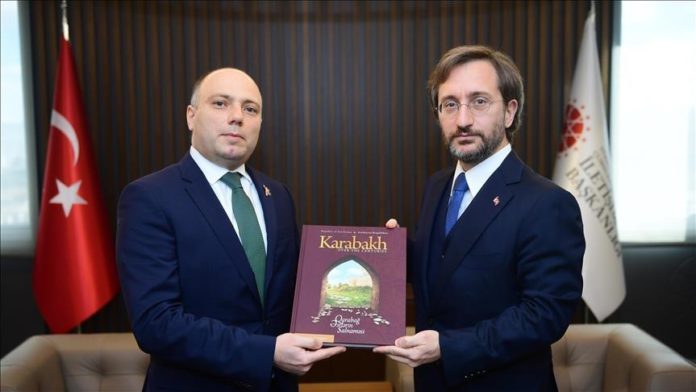 Fahrettin Altun received an Azerbaijani delegation in the capital Ankara, according to an official statement from the Turkish Presidential Communications Directorate.

Speaking at the meeting, Altun said the “two states, one nation” motto was implemented practically in the media coverage of the recent Karabakh conflict between Armenia and Azerbaijan.

“A publication prepared by the directorate in three languages on Azerbaijan’s victory in Upper Karabakh is a concrete symbol of brotherly relations between the countries,” he added.

Under the direction of Turkey’s President Recep Tayyip Erdogan and support by Azerbaijan’s President Ilham Aliyev, movies and series will also be co-produced on the 1992 Khojaly massacre and the Islamic Army of the Caucasus that liberated Baku in 1918, to showcase our countries’ shared history and ties to the world, Altun added.

On Feb. 26, 1992, with the Soviet Union just dissolved, Armenian forces took over the town of Khojaly in occupied Karabakh after battering it using heavy artillery and tanks, assisted by infantry forces.

The two-hour Armenian offensive on Khojaly killed 613 Azerbaijani citizens – including 106 women, 63 children, and 70 elderly people – and seriously injured 487 others, according to Azerbaijani figures.

Also speaking at the meeting, Kerimov expressed his pleasure on making his first official visit to Turkey.

“Turkey’s support for us is not new. Over a century ago, we liberated Baku with the help of the Islamic Army of Caucasus, and, recently we liberated our occupied territories again with Turkey’s help. We will never forget these,” he added.

Kerimov also thanked Turkey for its support in showing Armenia’s attacks on civilians to the world.