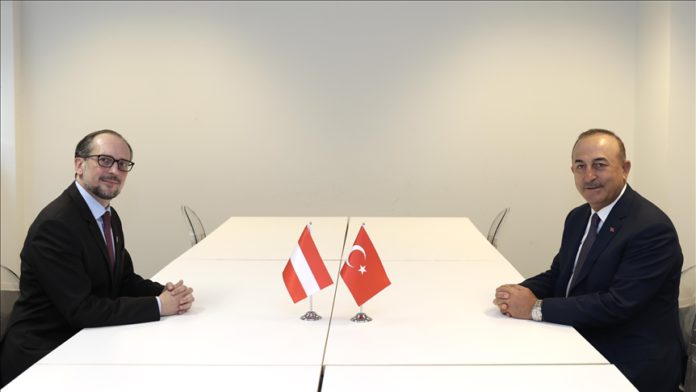 Tweeting after he met with Turkish Foreign Minister Mevlut Cavusoglu in the Italian capital Rome, Alexander Schallenberg remarked that all aspects of bilateral relations were discussed.

The meeting with Cavusoglu was good and substantive, he added.

The Turkish foreign minister, who is in Rome to attend a minister-level meeting of the Global Coalition to Defeat Daesh/ISIS, also met with Lebanese Deputy Prime Minister and Defense Minister Zeina Akar and Central African Republic Foreign Minister Sylvie Baipo-Temon.

Bilateral and regional issues were discussed, said Cavusoglu, noting that the two countries agreed to recognize COVID vaccine certificates issued by each other.

The meeting in Rome, which was the first face-to-face event since the start of the COVID-19 pandemic, aims to confirm that the coalition members are on the same page on the absolute defeat of Daesh/ISIS as well as their commitment to stabilizing the liberated areas of Syria and Iraq and consolidating the cooperation among its working groups.

Convened at Italy’s request, it will also discuss the threat posed by terrorist organizations affiliated with Daesh/ISIS in the Sahel and various regions of Africa.