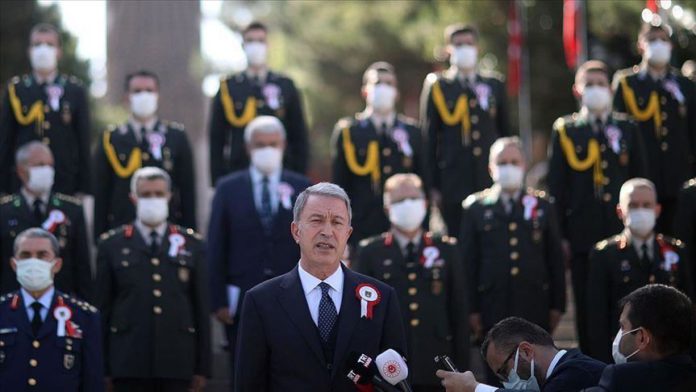 Armenia will pay for its terrible attacks on civilians in neighboring Azerbaijan, Turkey’s defense chief said on Monday.

“Sadly, they have attacked the city of Ganja and many other residential areas. This is a clear violation of the cease-fire,” said Defense Minister Hulusi Akar, attending the opening ceremony for the school year at the National Defense University.

“This constitutes a violation of the cease-fire. However, they carry on their attacks undeterred. One day they will be held responsible before history and international law for all this,” said Akar in the capital Ankara alongside the top brass of the Turkish Armed Forces.

The opening speech of the ceremony had been delivered by Azerbaijan’s ambassador to Turkey, Khazar Ibrahim, in what Akar said symbolized the nature and extent of brotherly relations between the two countries.

Relations between the two former Soviet republics have been strained since 1991 when the Armenian military occupied Upper Karabakh, an internationally recognized territory in Azerbaijan.

The OSCE Minsk Group — co-chaired by France, Russia, and the US — was formed in 1992 to find a peaceful solution to the conflict, but to no avail. A cease-fire was agreed to in 1994.

Also commenting on the recent departure of Turkey’s Oruc Reis seismic research vessel from the Mediterranean Port of Antalya, Akar highlighted that the ship’s activities would be coordinated with the Turkish Navy.

Turkey’s operations in the Eastern Mediterranean comply with international law and regulations, he said, adding: “We have territorial waters in the Aegean and Mediterranean, that have been registered by the UN. The operations we conduct in these areas are of scientific and technical nature and don’t constitute a threat to anyone.”

“The Turkish Navy will provide escort and protection to the Oruc Reis. We expect our neighbors to avoid provocative actions.”

Turkey, which has the longest continental coastline in the Eastern Mediterranean, has rejected the maritime boundary claims of Greece and the Greek Cypriot administration in the region, stressing that these excessive claims violate the sovereign rights of both Turkey and the Turkish Cypriots.

Ankara has sent out several drill ships in recent months to explore for energy on its continental shelf, asserting its rights in the region.

Turkish leaders have repeatedly stressed that Ankara is in favor of resolving all outstanding problems in the region through international law, good neighborly relations, and negotiation.