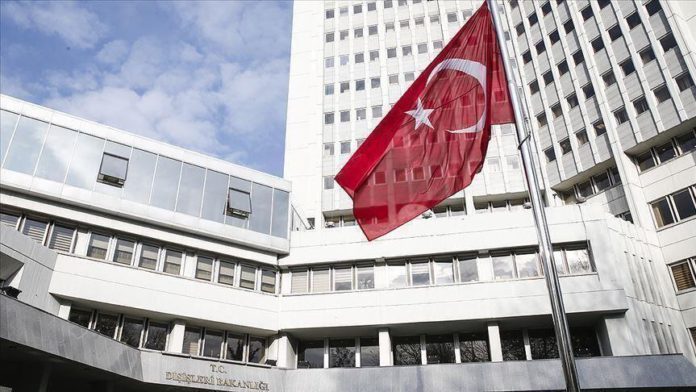 Turkey on Monday denounced a recent cease-fire violation and attack on Azerbaijani servicemen and civilians by Armenian forces in Nagorno-Karabakh.

“The attacks carried out in Upper Karabakh [Nagorno-Karabakh] against the Azerbaijani armed forces by the Armenian elements, who refused to lay down their arms and withdraw, are a clear violation of the cease-fire regime established by the Trilateral Declaration dated Nov. 9, 2020,” Turkish Foreign Ministry spokesperson Hami Aksoy said in a statement.

The Armenian elements — a detachment of six remnants of the Armenian armed forces — violated the cease-fire in Nagorno-Karabakh on Sunday and martyred an Azerbaijani soldier in the direction of Aghdam (Akaku) village in the Khojavend region, the Azerbaijani Defense Ministry said Monday.

“Military and civilian casualties and injuries occurred as a result of the attacks of Armenian armed elements, which took place earlier on Nov. 26, Dec. 8 and Dec.11, and the latest one on Dec. 27. As the signatory of the Trilateral Declaration, the primary responsibility for the withdrawal of all armed Armenian elements and compliance with the cease-fire regime lies in Armenia,” Aksoy said.

He stressed that the Azerbaijani side gave the “necessary response” by using its right of self-defense against the “provocations” of the Armenian armed elements.

“In order to be a stakeholder of the lasting peace that is trying to be established in the region, Armenia must accept the realities in the field and fulfill the commitments it has undertaken with the Trilateral Declaration,” he added.

Aksoy also wished Allah’s mercy upon the “Azerbaijani brothers” who lost their lives in the attacks, a speedy recovery to the wounded, and extended condolences to all Azerbaijani people.

Azerbaijan’s Defense Ministry said on Twitter that as a result of the actions taken, all six members of the illegal Armenian armed group were “annihilated” and also warned against “firm measures” by the Azerbaijani army if such an incident happens again.

Relations between the former Soviet republics of Armenia and Azerbaijan have been tense since 1991, when the Armenian military occupied Nagorno-Karabakh, recognized as an Azerbaijani territory, and seven adjacent regions.

However, the Armenian army violated the cease-fire on Dec. 13 and martyred three Azerbaijani soldiers in Khojavend’s Sur village and a soldier and a civilian near the town of Hadrut, according to the Defense Ministry.