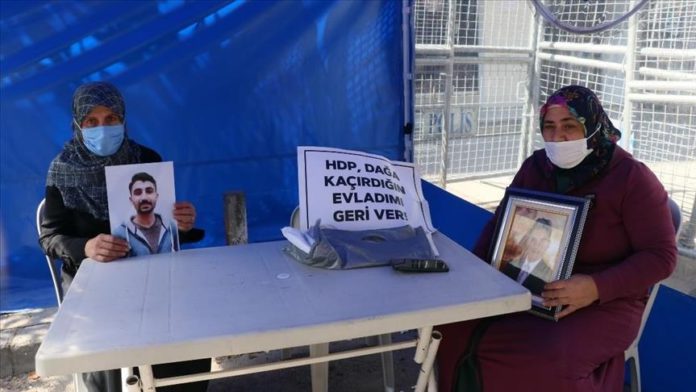 Two more families on Monday joined an ongoing sit-in in Turkey against the terrorist PKK.

Families of children abducted or forcibly recruited by the terror group have been protesting since Sept. 3, 2019 in the Diyarbakir province, calling on their children to lay down arms and surrender to authorities.

The protest outside the office of the Peoples’ Democratic Party (HDP), which the government is seeking to close over alleged links to the YPG/PKK, was started by three mothers who said their children were forcibly recruited by the terror group.

Hulya Bayar, from the southeastern province of Batman, said her sister Dilan Basir was forcibly recruited in 2014 when she was 23.

Bayar urged her sister to lay down her arms and surrender to Turkish security forces.

Sultan Cakir, another mother hailing from Torbali in the Aegean Izmir province, joined a sit-in protest in front of HDP provincial headquarters in Izmir.

Cakir said her son Ruhat was forcibly recruited by PKK when he was 24 and she has not heard from him since 2017.

“I am sure he was taken out of Turkey. Otherwise, we would have found him already,” she stressed.