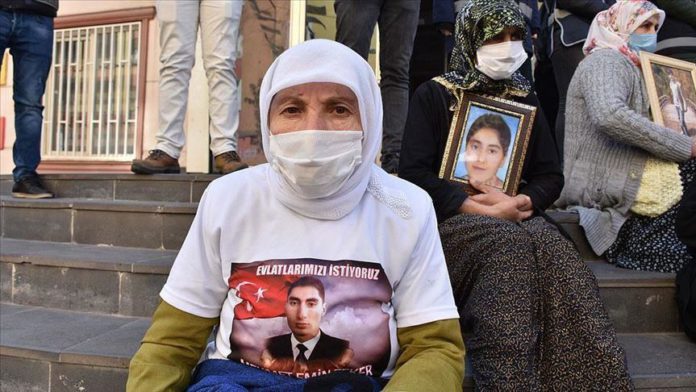 A sit-in on Monday by the families of children who were forcibly recruited by the terrorist organization PKK entered Day 441.

Gulbahar Teker, mother of Muhammed Emin Teker who was abducted six years ago, said children as young as 10, are taken to the mountains by the terrorists.

Stating she will stay put until her son returns, Teker said: “End this PKK. What do you want from us, our children?”

She called on her son to surrender to Turkish security forces. “All of you, turn yourselves in… My son, turn yourself in, let this longing end.”

Celil Begdas, father of Yusuf who was abducted by terrorists at the age of 17, said he has been at the sit-in for 18 months with the hope to reunite with his son.

“These children should’ve been at school,” he said.

The protest began on Sept. 3, 2019 in the city of Diyarbakir when three mothers said their children had been forcibly recruited by YPG/PKK terrorists. The sit-in outside the office of the Peoples’ Democratic Party (HDP) — which the government accuses of having links to the terrorist YPG/PKK — has been growing every day.