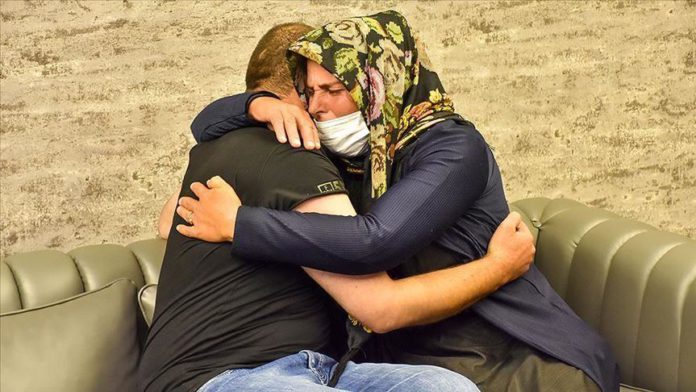 Thanks to Turkish police’s efforts, another child kidnapped by the PKK terror group reunited with his family on Thursday.

According to a statement issued by the police headquarters in southern Mersin province, a male member of the organization — identified only by an initial S. — surrendered to Turkish authorities, after the persuasion efforts of police.

S. met with his family at the Counter-Terrorism Directorate.

Another terrorist, who had surrendered to Turkish forces, met with her family after 11 years on Thursday.

Tayfur Fidan was persuaded by Turkish forces to lay down his weapons and surrender in southeastern Diyarbakir province. He met his mother Sever Fidan, who had been staging a sit-in with many other families in Diyarbakir demanding that the terror group return their children who were either kidnapped or deceived by the YPG/PKK.

The protest started last September outside the offices of Peoples’ Democratic Party (HDP), a political party accused by the government of having links to the terrorist organization YPG/PKK, in Diyarbakir when Fevziye Cetinkaya, Remziye Akkoyun, and Aysegul Bicer said their children had been forcibly recruited by PKK terrorists.

Since then, the number of families protesting in front of the building and demanding the return of their children has been rising.

As investigations are going on, surrendered terrorists are provided with many opportunities, including education rights and the freedom to live without fear and oppression.

They are able to contact their families freely and are provided with essential judicial assistance. The Turkish state offers a variety of services to ensure the surrendered terrorists’ integration into society.

According to their statements, ringleaders of the PKK terror group risk the lives of other terrorists to save their own lives and threaten those planning to surrender with torture.