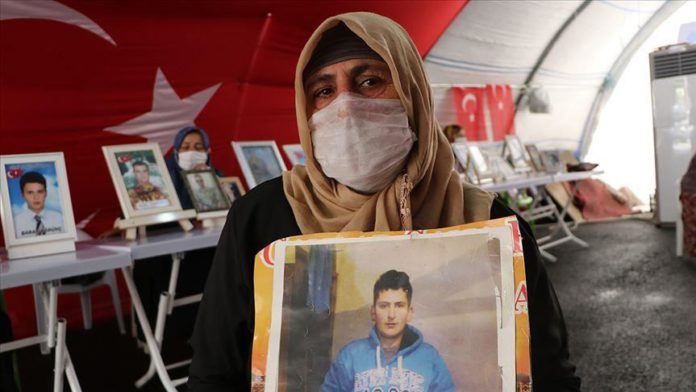 One more family seeking their child’s return joined the ongoing protest against the YPG/PKK terror group in Turkey on Wednesday.

Rahime Tasci and her family traveled from the northeastern Kars province to Diyarbakir in the southeast in the hopes of somehow reuniting with her son Faruk.

She said Faruk was kidnapped and taken to the mountains by the YPG/PKK and the Peoples’ Democratic Party (HDP) seven years ago, when he was just 15 years old.

Tasci joined the protest outside the offices of the HDP – a party accused by the government of having links to the YPG/PKK terror group – on its 394th day.

Started by three mothers – Fevziye Cetinkaya, Remziye Akkoyun, and Aysegul Bicer – on Sept. 3, 2019, the sit-in has steadily grown over the past year.

Tasci said she saw the protest on television and felt that it could help her find her son.

“I want my child from the HDP. They must bring back my child,” she said.

Urging her son to surrender to Turkish security forces, she added: “Please my son, come back wherever you are. Don’t leave your father and me alone. Wherever you are, I will find you and bring you back. Just try to call us.”