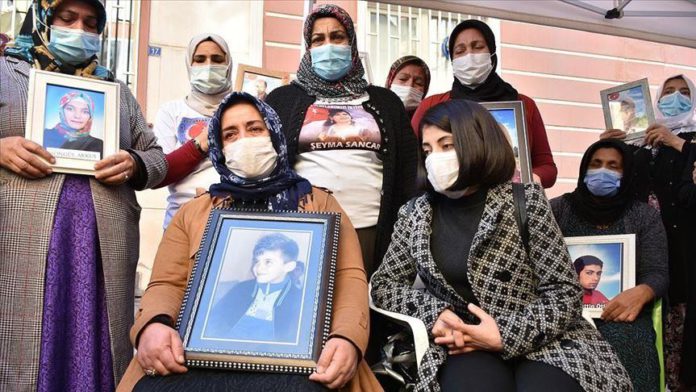 Another family on Tuesday joined the ongoing sit-in protests against the PKK terror group in Turkey’s southeastern Diyarbakir province, demanding the return of their son who was abducted.

Rukeyda Adiyaman and her daughter, Aysun, joined the demonstration from Hakkari province for Hamza, who was abducted four years ago at the age of nine.

Hamza’s elder sister Aysun said: “My brother was so little, nine years old. He did not know anything. We have been living with this pain for four years.”

Other families condemned the PKK terror organization for abducting a 9-year-old child.

“We are so sad. We want to reunite with my brother,” said Aysun. “My mother has been devastated with the pain of the disappearance of my brother. I beg him to return to us and surrender to our government.”

Protests began Sept. 3, 2019, in Diyarbakir when three mothers said their children were forcibly recruited by YPG/PKK terrorists. The sit-in outside the office of the Peoples’ Democratic Party (HDP) has been growing daily.

The government accuses of having links to the YPG/PKK terrorists.