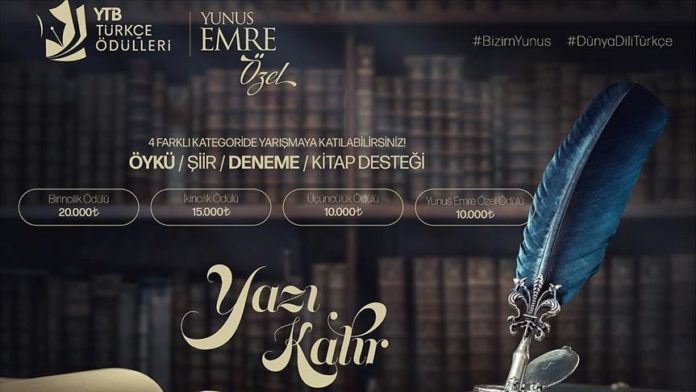 A writing contest for Turkish nationals living abroad was announced Tuesday to mark the Year of Yunus Emre and the Turkish Language.

The Presidency for Turks Abroad and Related Communities (YTB), a state agency, said in a statement that the YTB Turkish Awards Yunus Emre Special is being organized to promote the national language among expatriate Turks.

The event was held annually under the banner of YTB Turkish Awards, but this year the name was revised. President Recep Tayyip Erdogan dedicated the year 2021 to the memory of legendary poet and thinker Yunus Emre, who died 700 years ago.

The YTB said the contest will be divided into four categories, including story, poetry, essay and book support, with a separate jury for each category.

The jury will choose the winners based on the correct and effective use of Turkish grammar and spelling, compliance with the form and technical features, and originality and style, it added.

In addition, the Yunus Emre Special Award will garner 10,000 liras.

In the book support category, up to 20,000 liras will be awarded to the top five authors to fund copywriting rights and publishing of the book.

Meanwhile, the YTB Turkish Literature Book Set will be presented to the top 10 contestants in all categories along with the opportunity to participate in the YTB Literature Academy Program free of charge.

Turkish citizens who wish to participate in the competition should send their entries and the required documents announced by YTB via e-mail (turkceodulleri@ytb.gov.tr) by the deadline of June 30, 2021.

The application form can be downloaded from www.ytb.gov.tr.