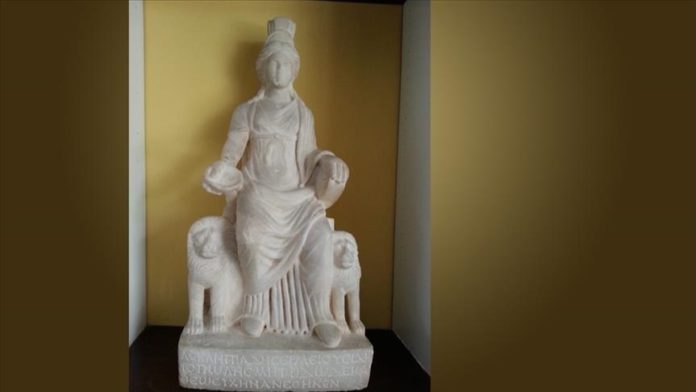 The Turkish Culture and Tourism Ministry on Sunday brought back a historical statue of Cybele, pre-historic goddess of fertility, which was smuggled to Israel in 1960s and sold there.

The statue was finally returned after hard work of Turkish authorities after they proved its origins and halted audition process in the US.

Minister Mehmet Nuri Ersoy told a meeting in Istanbul Archeology Museums that Turkish authorities did their best to introduce ancient artifacts in an effort to contribute to the cultural and historical background of human civilization, and protect the country’s cultural wealth.

The 1,700-year-old statue is believed to be dating back to the 3rd century AD and was originated in the Anatolian territory according to the inscriptions and its typological features. Turkish authorities said the return process of the statue began after their Israeli counterparts got in touch about the item’s sale.

After Turkey confirmed based on the available evidence that the statue was illegally taken out of the country, the owner of the statue agreed to return it to Turkey without a judiciary process.

Cybele was a “mother” goddess of fertility and a protectress and was regarded as the mistress of wild nature, historians argue, and that its origins date back to the 8th century BC. The influence of the goddess was present in the Mediterranean basin, especially Anatolia.

The lions on both sides of the Cybele, worshipped since prehistoric times, indicate the mother goddess’ dominance over both nature and animals. According to its inscription, the statue was presented to the 12 major Greek deities as an offering. “Hermeios’ son, Asclepiades from Sideropolis erected the votive statue to Twelve Olympians,” is written on the statue.

The statue is planned to be taken to the western Afyonkarahisar province of Turkey where a new museum will be built and the statue will be exhibited.