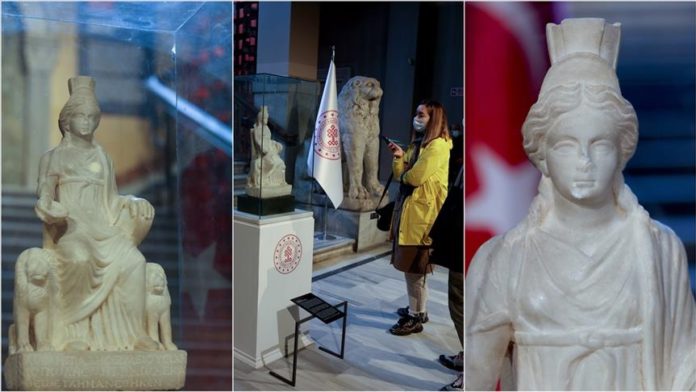 Regarded as the symbol and protector of fertility and abundance in pre-historic times, Cybele has been started to be displayed in an Istanbul museum on Tuesday.

The statue, which was smuggled to Israel in 1960s and sold there, was finally returned home from the US at the weekend after nearly 60 years of hard work by Turkish authorities.

On exhibition in its temporary place in Istanbul Archaeological Museums, the 1,700-year-old statue is believed to be dating back to the 3rd century A.D. and was originated in the Anatolian territory, according to the inscriptions and its typological features.

The lions on both sides of the Cybele, worshipped since prehistoric times, indicate the mother goddess’ dominance over both nature and animals. The influence of the goddess was present in the Mediterranean basin, especially in Anatolia.

“Hermeios’ son, Asclepiades from Sideropolis erected the votive statue to Twelve Olympians,” is inscribed on the statue’s pedestal.

Later, the statue will be displayed in a new museum that will be built in western Afyonkarahisar.

US diplomats in Ukraine to ‘spend the night in Poland’