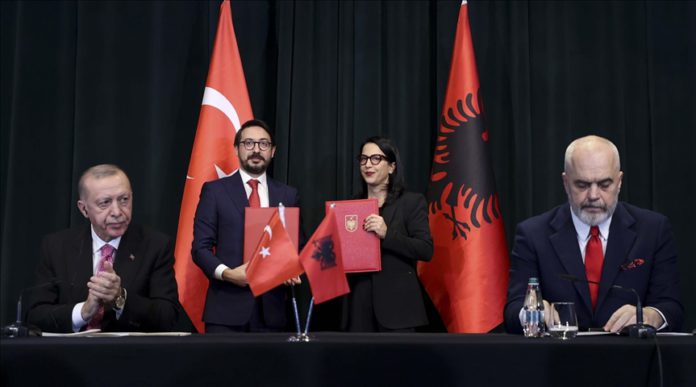 Turkiye and Albania on Monday signed seven new agreements to boost cooperation between the two countries.

Turkish President Recep Tayyip Erdogan and Albanian Prime Minister Edi Rama took part in the signing ceremony of the agreements in various areas, including disaster and emergency management, the media, state archives, culture and art, security, and youth and sports.

The deal was inked by Anadolu Agency Director General Serdar Karagoz and Valbona Zhupa, his counterpart at Albanian Telegraphic Agency.

The ceremony took place ahead of a joint press conference between Erdogan and Rama following one-on-one and inter-delegation meetings.

Erdogan arrived in the capital Tirana early Monday and was welcomed by Rama with an official ceremony.

Earlier on Monday, Erdogan attended a handover ceremony for over 500 housing units a Turkish agency built for earthquake victims in Albania.

During his visit, all aspects of the strategic partnership between Turkiye and Albania and steps to enhance bilateral cooperation are expected to be discussed.