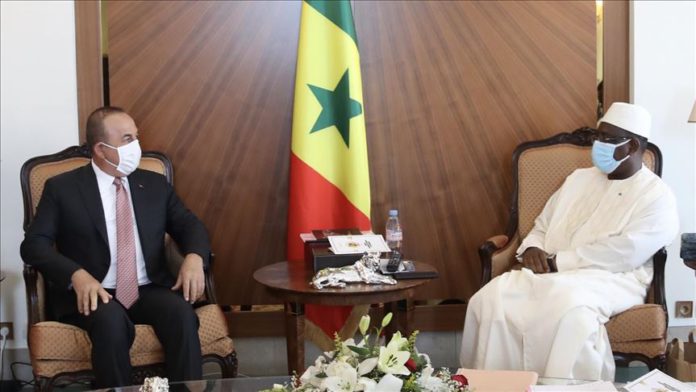 The remarks Mevlut Cavusoglu came at a joint news conference with his Senegalese counterpart, Amadou Ba, in Dakar on the last day of a three-nation West African tour where the pair discussed aspects of bilateral relations and regional issues.

Senegal is an important actor for Africa and the world, Cavusoglu said. “We also exchanged views on the Mali issue and we are happy to see that our views fully overlap,” he said.

Highlighting the importance of the completion of a transitional period and re-establishing the constitutional order in Mali, Cavusoglu said Turkey can support Mali and the Malian people.

“The transitional process in Mali must be completed in cooperation with civilians and the international community, especially the Economic Community of West African States (ECOWAS),” he said.

Ba said: “We want to increase the trade volume with Turkey to $400 million” and noted the volume between the two countries increased from $15 million to $250 million from 2008 to 2019.

Turkey’s views on many issues overlap with Senegal, he said, adding that their relations are based on a win-win basis.

Cavusoglu said on Twitter he met with Senegal President Macky Sall and that the countries want to develop investments.

“Turkish businesspeople will continue to contribute to the Emerging Senegal Plan,” he said.

Speaking with his Moroccan counterpart, Nasser Bourita, on the telephone, Cavusoglu hailed Morocco’s efforts in Libya.

Turkey supports the internationally recognized government based in the capital, Tripoli, and a non-military resolution of the crisis.

'Shocked and saddened': World reacts to assassination of Haitian president