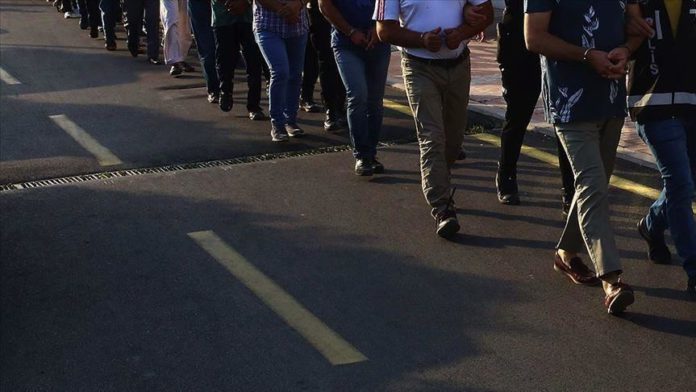 A total of 34 people have been arrested across Turkey for their suspected links to Fetullah Terrorist Organization, the group behind the 2016 defeated coup in the country, security sources said on Tuesday.

15 former policemen, who were involved in the infiltration of the police department, were arrested in an Ankara-based operation by teams of anti-smuggling and organized crime branch of the police in eight provinces.

The suspects had previously been dismissed from their profession as part of probe into FETO terror group.

The suspects had been in contact with and helped senior members of the terrorist group.

Eighteen more FETO-linked terror suspects were arrested over irregularities in administrative judicial examination in 2013 after prosecutors in the capital Ankara issued arrest warrants for 21 suspects, including dismissed judges or candidates, officers and attorneys.

Twelve other FETO suspects were captured in a Bursa-based operation conducted in seven provinces. While one suspect was remanded in custody, eight of them benefited from the provisions of effective remorse by making a confession and three were released on bail.

The confessors revealed the names of 83 more suspects who had not been included in FETO investigations.

This came after prosecutors in Bursa issued arrest warrants for 14 suspects.

As many as 17 FETO suspects were also arrested in a Samsun-based operation conducted in eight provinces.

Meanwhile, a former non-commissioned officer, who had been dismissed for communicating with so-called covert imams of FETO, has been sentenced to six years and three months by Adana 11th High Criminal Court.

Turkey: Industrial production up in January