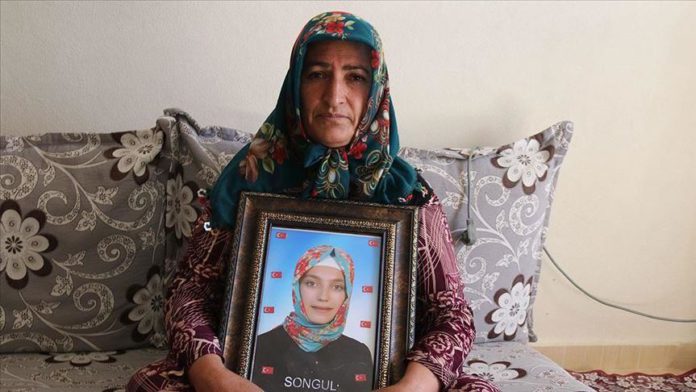 A sit-in protest by a group of families pleading for the return of their children recruited by the YPG/PKK terror group continued on 275th day in the southeastern Diyarbakir province of Turkey.

The protest started on Sept. 3 outside the offices of the Peoples’ Democratic Party (HDP), a party accused by the government of having links to the YPG/PKK, in Diyarbakir when Fevziye Cetinkaya, Remziye Akkoyun and Aysegul Bicer said their children had been forcibly recruited by PKK terrorists.

The sit-in of families has been growing day by day with participation of many others since then.

Protesters vow to stay there until every family reunites with their child.

Zumrut Salim, one of the mothers who joined the protest for her son Hamza who was abducted six years ago when he was just 14-year-old, said that she will not leave until she gets her son back.

Coming from another southeastern province Hakkari to Diyarbakir for her son, Zumrut said: “We are here for 275 days. We will continue our protest.

“We will not leave until we get our children back.”

Zumrut called on her son to return and surrender to security forces, expressing her devastation since he left them.

‘They are ignoring us’

Suleyman Aydin, a father from Diyarbakir joining the sit-in for his son Ozkan who was kidnapped five years ago when he was 15, reiterated that they will remain outside party offices until all abducted children return.

“We are outside the offices of the party which stole the children of these people. They are ignoring us,” he said.

Aydin urged HDP lawmakers to help families reunite with their children, instead of inciting provocations within the country.