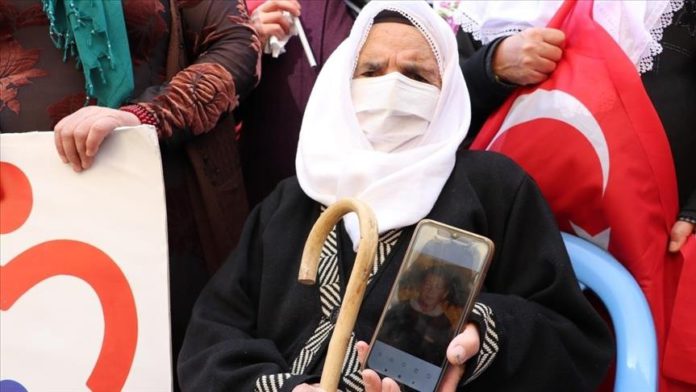 Two more families joined the ongoing sit-in protest against the PKK terror group and its Syrian offshoot YPG in southeastern Turkey on Thursday.

Halime Basal, a woman who came from the southeastern Siirt province, said her son Zahir was abducted by the terror group at the age of 14.
Basal said she wanted her beloved child back, adding she would not leave the protest until her son returns.

Yenal Basal, accompanying her mother, said they were physically abused by the affiliates of the terror group.

Meanwhile, Ercan Aktas, a man from southeastern Hakkari province, joined the protest for the sake of his sister, Ayse, who was abducted at the age of 16 in 2014.

Aktas said his father lost his life in 2017 after the abduction of his sister and asked her to surrender to security forces.

So far, at least 24 families have reunited with their children who fled the terror group and surrendered to Turkish security sources. Offenders who are linked to terrorist groups and surrender are eligible for possible sentence reductions under a repentance law in Turkey.

Mirziyoyev set to seek another term as Uzbekistan's president

Can we hit the reset button on capitalism?