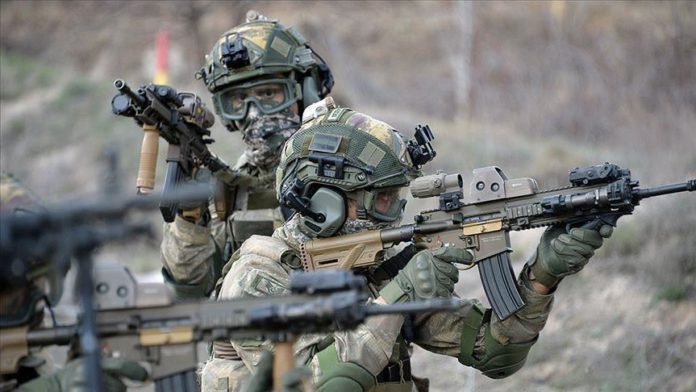 A total of 107 terrorists have been neutralized as part of Turkey’s domestic and cross-border counter-terrorism operations in the past 30 days, the National Defense Ministry said on Friday.

Nadide Sebnem Aktop, the ministry spokeswoman, said at a briefing that the Turkish Armed Forces continued its operations against terror groups including PKK, YPG — the Syrian branch of PKK — and Daesh/ISIS, saying a total of 21 operations were held.

“The operations resulted in the neutralization of 107 terrorists,” Aktop said, adding 46 were eliminated within Turkey whereas the remaining 61 were neutralized outside of the country.

The military activities included two cross-border and five domestic large-scale operations, she said, and noted that dozens of shelters, storages, caves and gun positions used by terrorists were destroyed.

The spokeswoman welcomed the agreement between the Iraqi central administration and the Kurdish Regional Government signed on Oct. 9 — seeking elimination of PKK in the Sinjar region of northern Iraq.

The Turkish army this year destroyed a total of 14 tunnels near the Syrian borderline and established 971 kilometers (603 miles) of modular concrete wall across the borderline with Syria and Iran.

Commenting on the developments regarding Azerbaijan, the spokeswoman said the escalation was triggered by Armenia which targeted civilian settlements in violation of the recently made temporary humanitarian cease-fire.

“Armenia’s use of banned ammunition and weapons in its attacks targeting innocent civilians are clearly war crimes and crimes against humanity,” she said, noting that so far nearly 50 Azerbaijani civilians have been killed.

The Turkish Armed Forces would never accept the isolation of Turkey and the Turkish Republic of Northern Cyprus in the region, the spokeswoman added.