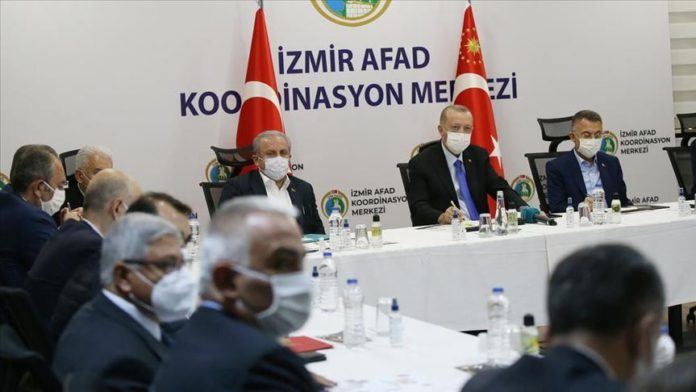 The Turkish president on Saturday announced that 103 people were rescued from debris after an earthquake hit Turkey’s Aegean provinces on Friday.

Recep Tayyip Erdogan inspected the earthquake zone in the coastal Aegean province of Izmir, and the authorities at the Disaster and Emergency Management Authority (AFAD) Coordination Center briefed the president on the work carried out after the quake

“As of now, 37 people have lost their lives and 885 have been injured,” said Erdogan.

Erdogan also said that a grant-in-aid of 24 million Turkish liras (over $2.87-million) has been sent so far to the quake-hit area and more will be provided based on need.

He stressed that 35 mobile base stations have been shipped to the region, with 25 already installed, adding that after all debris is removed, construction work will start to build houses for those whose homes collapsed.

Erdogan said the National Education Ministry would make a decision whether or not to extend the suspension of education in the area.

Dorms would be available for those affected by the quake if they were willing to stay, Erdogan added, noting that following the disaster, 88 countries have conveyed their messages of solidarity and wishes of fast recovery.