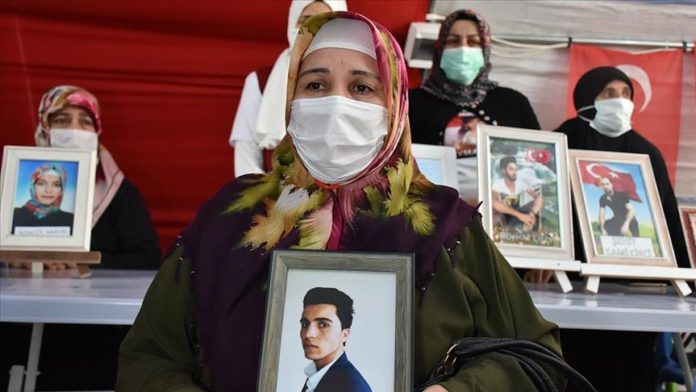 One more family on Friday joined the ongoing sit-in protest against the PKK terror group in Turkey’s southeastern Diyarbakir province, demanding the return of their abducted sons.

Mother Zinnet Cengiz from Kocaeli, northwestern Turkey, joined the protest for her son Tuncer, who was kidnapped and taken to mountains about five years ago when he was 18 years old.

Cengiz said in Kurdish that she has been grieving for the loss of her son for five years and that her husband could not come because he has been on dialysis.

“I want my child back. Despite this epidemic, I came for my child,” she said and added that she would continue her protest until the return of his son.

Adem Cengiz, another protester, noted that his brother was kidnapped from Agri, eastern province of Turkey, where they went for his sister’s wedding five years ago, and since then they have never heard from him.

“HDP has to bring back my brother. Enough is enough. Brother, run wherever you are, the whole family misses you so much,” he said.

Nazli Sancar, a mother of abducted girl Seyma Sancar, said her daughter was kidnaped nine years ago when she was just nine years old.

“We all want our children back from the HDP. We don’t have the strength anymore,” Sancar said.

“I appeal to all mothers […] come forward and ask for their abducted children from the HDP and the PKK. 21 of our children have arrived. We were so happy. Every returning son is a hope for us. We’re here until each of our children return,” she added.

Nazime Arslan, a woman whose daughter Hatice was kidnapped from the Yuksekova district of Hakkari province five years ago when she was 17, said in Kurdish that the terrorist organization also killed her husband three years ago.

“They kidnapped my daughter, They killed my husband. Allah does not accept this. Hatice, come surrender to your state,” Arslan said.