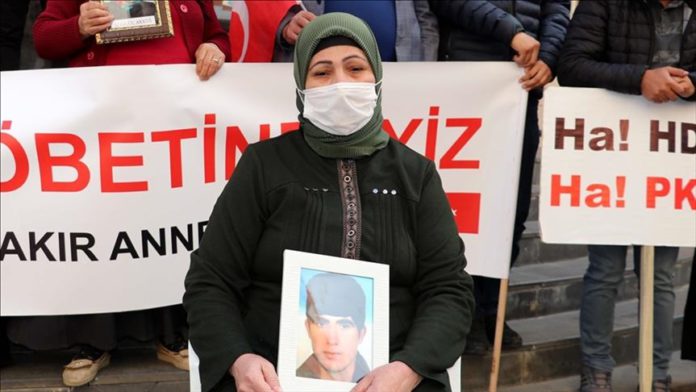 Families of children abducted or forcibly recruited by the PKK terror group continue their sit-in protest in southeastern Turkey on the 569th day.

Families of children abducted or forcibly recruited by the PKK terror group have been protesting for more than one and a half years in the Diyarbakir province, calling on their children to lay down arms and surrender to authorities.

The protest outside the offices of the Peoples’ Democratic Party (HDP), which the government accuses of having links to the PKK, was started by three mothers on Sept. 3, 2019.

Nisbete Yuksel, a woman who came from the southeastern Batman to join the protest, said her son, Firat, had been kidnapped by the terrorist group seven years ago.

Yuksel said her son was kidnapped while they were residing in Istanbul, adding he went out one day and never came back.

“Enough is enough, I cannot bare this anymore. I want my child back,” she said, calling on the HDP to bring her son back.

She also called on her son to surrender and said: “I did not bring you into this world so that you go to the mountains […] Do you not pity us? Come wherever you are, your father is very ill.”

'Serbia, Kosovo to meet for talks in US next month'