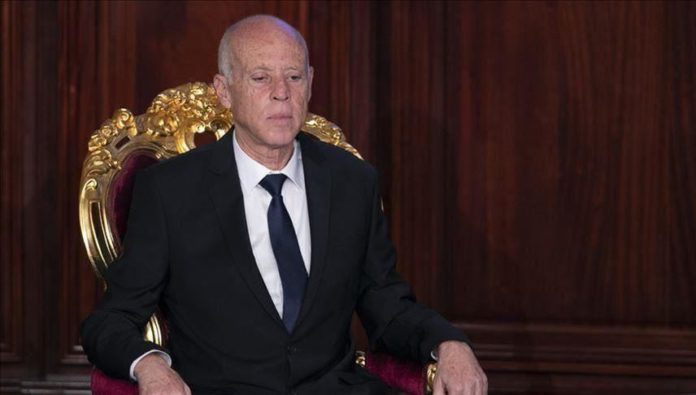 Tunisia’s president on Wednesday stressed his country’s firm position on the rights of Palestinians, saying his country “does not intervene in the choices of some countries, nor counter them.”

Kais Saied made the statement after meeting at the Carthage Palace with Hayel Al-Fahoum, the Palestinian ambassador.

Although Saied did not mention the controversial normalization agreement between the UAE and Israel, he linked his statements to his country’s firm position on the Palestinian issue.

“We [Tunisia] do not intervene in the choices of some countries and do not confront them, and we respect the will of states, as they are free in their choices and before their people,” the statement said.

“However, we also have our positions that we express freely, far from issuing statements to denounce this or that position,” Saied said.

“The rights of Palestinians will not be lost as long as there are free people,” he said.

For his part, Al-Fahoum stressed “Palestine’s appreciation for the consistent and conscious Tunisian position to advocate Palestinians’ rights.”

Tunisian parties and organizations recently denounced the UAE-Israel normalization agreement, but no official position was issued by Tunisian authorities.

Last week’s deal made the UAE the first Gulf state and third Arab nation to have full diplomatic relations with Israel, after Egypt and Jordan.

Despite reports that the deal halted Israel’s controversial plan to annex parts of the West Bank, Israeli Prime Minister Benjamin Netanyahu has confirmed his government’s continued commitment to go ahead with annexation plans.