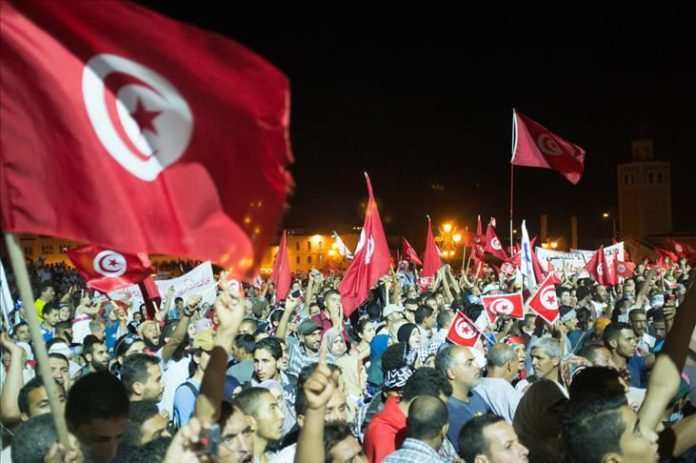 It is almost a decade since the Tunisian revolution, sparked by the self-immolation of Tunisian vendor Mohamed Bouazizi in December 2010, encouraged a series of demonstrations across several Arab countries leading to what came to be known as the Arab Spring.

Despite the failure of the revolts in other Arab countries, Tunisia’s revolution has resulted in a democratic experience that is still “resilient”.

Experts warn that the Tunisian democracy was facing tough economic, political and social challenges that could undermine the nascent experience.

“Tunisia has successfully consolidated the democratic transition despite all the economic, social, and political difficulties,” Mahdi Mabrouk, director of the Arab Center for Research and Policy Studies, told Anadolu Agency.

He said Tunisia is going through a normal “stage” like any other newly established democracy. “The country has so far witnessed a peaceful transfer of power and the expansion of political participation, in a way that guarantees pluralism while respecting human rights, including the right to organize.”

Abdellatif Al-Hanashi, a professor of Contemporary History at the University of Tunis, agreed that the Tunisian democratic experiment has been “a successful one to some extent”.

“The democratic experiment appears to be successful considering it is the first and the longest in the Arab world, especially after the Arab Spring,” Al-Hanashi emphasized.

“The rest of the democratic experiments have failed”, he said in reference to revolutions that erupted in other Arab countries, including Egypt, Libya, Yemen, and Syria, adding that the outcome was civil wars or a departure from the main objectives of the revolution.

Mabrouk, however, warned that the young democracy was at risk of faltering because of the strenuous challenges it has faced.

He blamed the political elites for distorting the nascent democracy to serve their own interests and “almost reducing it to the conducting of elections and the peaceful transfer of power” while the essence and values of democracy are being neglected.

Al-Hanashi, while condemning the behavior of the new political elite particularly in parliament, hailed the constitution ratified in January 2014, as “one of the glories of the Tunisian revolution.”

In terms of the economy, Al-Hanashi holds that “the required accomplishments were not achieved” mainly because of regional crises.

He sees that the protracted civil war in oil-rich Libya has cost many Tunisians their jobs while terrorism has impacted negatively on the Tunisian economy.

“We are in a troubled region, especially the Libyan crisis, and Tunisia is one of the countries that have been greatly affected by this crisis at the economic level. Libya has always been a vital space for the Tunisian economy,” Al-Hanashi said.

“The economic crisis is a threat to democracy as it may strengthen populists as witnessed in countries like Italy, Spain, and Germany who tend to be less supportive of human rights issues such as immigration,” he said.

According to Mabrouk, an increased unemployment rate, which stands at around 18%, risks increasing dissatisfaction with democracy and giving rise to populist calls for dictatorship.

He added that the presidency was the one leading the populist discourse, presenting itself as “a solution to the democratic dilemma, which is not a solution”.

Al-Hanashi, for his part, blamed the political elite for making very high promises during the elections that they could not fulfill.

“This causes disappointment and frustration among the people which has been exploited by groups aligned with the former regime of Zine al-Abidine Bin Ali,” he said.

Hope still looms
Despite the challenges, Al-Hanashi voiced hope in the country’s democracy particularly if the Libyan crisis is resolved, even if partially, as this will impact positively on Tunisia’s economy and politics.

“Libya needs reconstruction in which Tunisians can contribute,” he stated.

Mabrouk expressed optimism that “the young democracy will continue to defend itself, on the condition that campaigners of the project do self-criticism” in such a fragile region and especially in light of the coronavirus pandemic that has exacerbated economic challenges.

Echoing a similar view, Al-Hanashi said “the parties are supposed to self-criticize their experience, which has not happened”.