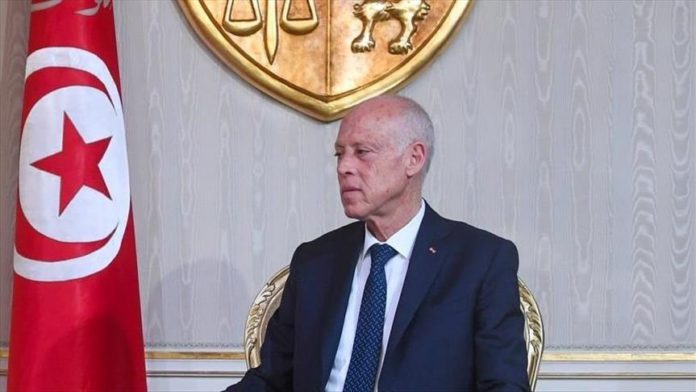 Tunisia’s president on Saturday denied reports of mediation efforts to resolve his differences with the nation’s parliament speaker.

“There’s been a lot of talk about mediation. There is no mediation, no mediator, and no middle solutions, the truth is the truth,” Kais Saied said during a meeting with Zuhair Maghzawi, secretary-general of the People’s Movement, at the presidential palace in Carthage.

The Tunisian leader said he had no problem with individuals, rather “with a system that still exists and continues to abuse the Tunisian people,” adding that he remains firm on this position.

On Thursday, Khalil Al-Baroumi, spokesman for the Ennahda Party led by Parliament Speaker Rached Ghannouchi, said Saied and Ghannouchi had held a “positive” and “lengthy” meeting on issues affecting the country.

Saied said the path adopted since the 2011 revolution to address economic and social issues has been replaced by issues of identity and religion.

“Tunisia has two regimes,” Saied said, “a hidden regime that controls the country, and an outward regime,” without elaborating.

The Tunisian president warned that he will not accept middle solutions. “[What is] right is clear and the wrong is clear,” Saied said, calling on stakeholders to avoid manipulating the Constitution and engage in dialogue by prioritizing the will of the Tunisian people.

“We respect the figures in power, but this respect was met only by speeches and blatant accusations,” Saied said, in reference to criticism leveled at him by members of the Ennahda Party and the Heart of Tunisia Party.

The reported meeting between Saied and Ghannouchi came after a six-month impasse.

On June 15, Ghannouchi announced that Saied had agreed to supervise a national dialogue to resolve the political crisis that the country has been going through for months.

Tunisia has been gripped by a deep crisis since Jan. 16 when Prime Minister Hichem Mechichi announced a cabinet reshuffle, but Saied refused to hold a ceremony to swear in the new ministers.

The country has seen protests in several regions, amid a major economic downturn exacerbated by the coronavirus pandemic.

US stocks close with strong gains as tech leads way