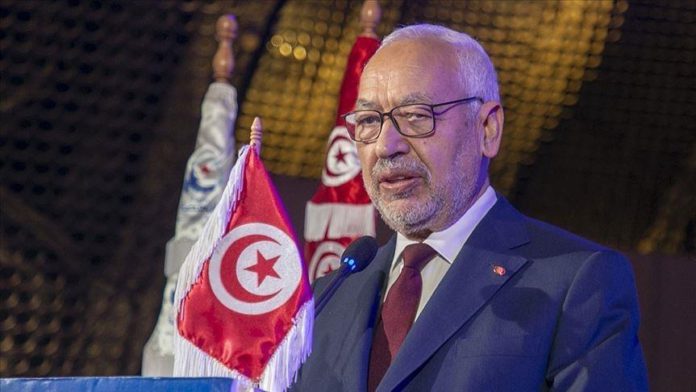 Tunisian Parliament Speaker Rached Ghannouchi on Sunday called on his countrymen to unite their ranks, avoid divisions, and collectively face the coronavirus outbreak.

Ghannouchi, who is also the leader of the moderate Islamist Ennahda party, made the remarks as the country is commemorating the 64th anniversary of the proclamation of the Tunisian Republic celebrated on July 25 each year.

Commenting on calls for demonstrations and protests launched by activists on social media, Ghannouchi said “the marches and protests are a right guaranteed by the constitution as long as they abide by the law.”

Tunisian activists have in recent days used their social media platforms to urge Tunisians to protest on July 25 against the background of a major economic downturn exacerbated by the coronavirus pandemic.

Tunisia has been gripped by a deep crisis since Jan. 16, when Prime Minister Hichem Mechichi announced a cabinet reshuffle but President Kais Saied refused to hold a ceremony to swear in the new ministers.

The country has seen protests in several regions with some calling for the overthrow of the current political system in its entirety, including the government and parliament, and demanding the formation of a new political system.

Ghannouchi, who just recovered from coronavirus, told Tunisians that the country “does not deserve demonstrations, but rather deserves to demonstrate against coronavirus” in a united manner.

“There is no longer any opposition and authority when there is a threat [coronavirus] facing the country and hundreds of deaths are recorded … What we need today is a united Tunisian front against the pandemic, and then other concerns shall follow,” Ghannouchi said.

On Friday, the Ennahda party said its leader has recovered from the virus, dispelling rumors that Ghannouchi was unable to undertake his tasks. The party also criticized opposition politicians who called for Ghannouchi’s replacement as parliament speaker.

The North African country has so far confirmed 563,930 virus cases, including 18,369 fatalities.

Pakistan: Karachi plane crash was due to 'human error'

Mozambique extends lockdown for another 30 days