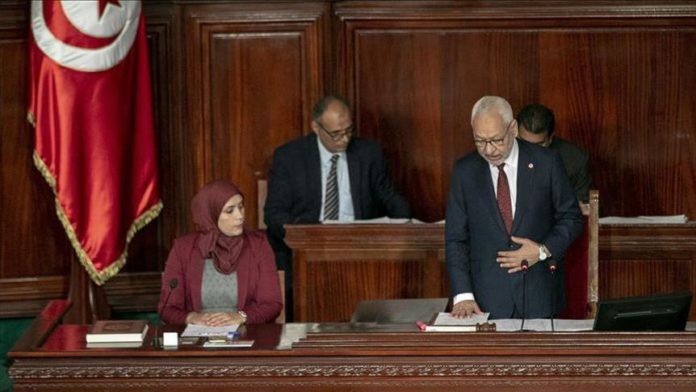 Tunisian Parliament Speaker Rached Ghannouchi is facing a no-confidence vote on Thursday, which was pushed for by four political blocs.

The vote will determine Ghannouchi’s position in parliament and his political role in the country and whether he will continue his term (2020-2024).

It needs 109 votes out of 217 to withdraw confidence from Ghannouchi, which poses a challenge to the four blocs that championed the vote.

The blocs that announced that they would vote to withdraw confidence from Ghannouchi are: the Democratic Bloc (the Democratic Current and People’s Movement) (38 seats), Tahya Tounes Bloc (10 seats), the National Reform Bloc (16 seats) and the National Bloc (11 seats).

The Free Constitutional Bloc, which holds 16 seats, announced it will also vote to remove Ghannouchi, increasing the potential votes to 91, which still remains below the required majority.

“I did not come to the presidency of the parliament by a tank, but I came through election,” Ghannouchi said expressing his confidence of having the majority.

Soyuncu named as part of Premier League Team of Year