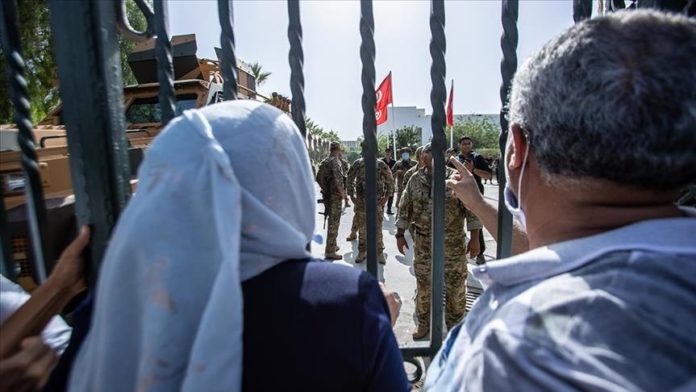 Tunisian President Kais Saied’s dismissal of the government of Prime Minister Hichem Mechichi, suspension of parliament and assumption of executive authority has been defined by some political circles as a “coup.”

As the birthplace of the Arab Spring, Tunisia was considered the only example of democratic success in the Arab protest wave of 2011, when the administration handed over its achievements in the field of fundamental rights and freedoms through elections to its successors.

But Tunisia has not been able to achieve political stability and therefore economic stability during the turbulent transition it entered after the Arab Spring. More than 10 governments have taken office in the country in the last 10 years. The revolution failed to meet its promises such as employment opportunities, and the economic situation for ordinary Tunisians became more complicated every day due to the global storm caused by the coronavirus pandemic.

During Republic Day on July 25, there were mass protests in Tunisia against the political atmosphere throughout the country, and attacks were carried out on the headquarters of some political parties.

Saied said he would use “extraordinary constitutional powers” to “prevent the country from being dragged into civil war” after meeting with the security bureaucracy and military commanders earlier in the evening.

He announced that he had dismissed the prime minister, suspended parliament for 30 days and would appoint a new prime minister and assume executive authority.

The leading parties in parliament, especially the Ennahda Movement, described Saied’s move as a “coup.”

Rached Ghannouchi, the speaker of parliament and co-founder of Ennahda, who was accompanied by deputies, was barred from entering parliament by the country’s military.

Ghannouchi called on the people to peacefully protest Saied’s decisions and labeled them a “coup” which has no legal basis.

-Who is Kais Saied?

Saied is a former professor of constitutional law and was among a delegation of experts studying the Tunisian Constitution, which was adopted in 2014 following the Arab Spring. He entered the race as an independent candidate in the 2019 presidential election and managed to qualify for the runoff. In 2019, with his unusual campaign benefiting from that time’s popular “revolution” theme, he won a landslide victory in the second round of popular elections.

Attracting the attention of the international press with his strong oratory, in which he dominantly used classical Arabic language, Saied stood out in the political structure of the country with his defense of a system created by individuals rather than political parties.

-How did Tunisia come to this point?

The Ennahda Movement won parliamentary elections held simultaneously with the presidential election in 2019. It took first position with 52 MPs in the 217-seat parliament but failed to gain a majority that could form the government alone.

Tunisia has been the scene of numerous wrangling within parliament since 2019.

The technocrat Cabinet of Prime Minister Hichem Mechichi, appointed by Saied in July 2020 as the third prime minister in the last two years, took office in parliament with the support of parties such as Ennahda, the Heart of Tunisia Party and the Honor Coalition.

However, the rift between Saied and Mechichi has become open to public opinion. Saied argued in February that Mechichi’s Cabinet overhaul was not constitutional. Despite this, parliament gave the Cabinet a vote of confidence. While tensions have occasionally escalated between the two with mutual statements, the fact that political actors have played a role in this decoupling has deepened the crisis.

The fact that the Constitutional Court, provided by the 2014 Constitution with the power to finally resolve the issue, has not yet been established has also made the crisis even more unresolved.

As this disintegration within the state and politics deepened, Tunisia continued to grapple with crises made difficult by the severe economic and health conditions caused by the COVID-19 outbreak.

The UK-based Middle East Eye website published a plan in May that Saied’s advisers could use Article 80 of the Tunisian Constitution in extraordinary circumstances to extend the powers of the president, and in that way, he could seize the power of the government. He rejected the claims, saying “Tunisia has left behind the era of coups.”

There were various reactions within the country to the president’s announcements on suspending parliament and dismissing the prime minister. Some Tunisians celebrated the president’s decisions with fireworks, while others protested on the grounds that it was an attempted coup.

On Monday, supporters and opponents of the resolutions faced off in front of parliament. Security forces took heavy measures. There were occasional skirmishes between demonstrators and security forces, who were trying to prevent a possible confrontation between the two sides decisively.

Reactions at different levels have been raised from political parties in parliament, including the Ennahda Movement, as the largest party, and the Heart of Tunisia Party as the second largest. Some of the parties said the president had violated the Constitution and overused his powers with this step, while Ennahda and the Honor Coalition accused Saied of attempting a coup.

In contrast, the People’s Movement, which also supported Saied after the election process, the Popular Front, and finally the pro-old regime Free Constitution Party announced their support for his steps.

The Tunisian General Labour Union (UGTT), which has more than a million members, avoided taking a firm stance after a meeting this week with Saied while urging the president to draw a clear roadmap as soon as possible after the extraordinary measures.

The Tunisian Confederation of Industry, Trade and Handicrafts (UTICA), the largest business organization in Tunisia, called for the “immediate establishment of a government that will protect the achievements accomplished so far during this difficult period in social, economic and health conditions” of the country.

Meanwhile, in the country, where civil society grew stronger after the revolution, there are also segments who think that Saied’s decisions are a violation of authority. The Tunisian Supreme Judicial Council reacted to Saied’s appointment of himself as attorney general at the same time.

In its statement, the council drew attention to the independence of the judiciary and stressed that this power should be kept out of political strife.

Most countries in the region and Western democracies have meanwhile adopted a “wait and see” approach.

US Secretary of State Antony Blinken declined to take a firm stance on the events during a meeting with Saied. In a statement, Blinken called on the Tunisian president to adhere to the principles of democracy and human rights and to continue dialogue with all political actors and the Tunisian people and said the US would continue to monitor the situation closely.

The European Union has called on all actors in Tunisia to respect the country’s Constitution and refrain from violence.

Germany and France avoided describing the developments as a “coup attempt,” calling for the rule of law and abstention from violence.

Due to the Islamist identity of the Ennahda Movement in Tunisia and its removal from office as a ruling partner, many actors in the region who took a stand against Islamic movements have avoided openly reacting to Saied’s initiative.

The Gulf monarchies, known for their interventions in post-Arab Spring administrations, have largely chosen to remain silent. Bahrain “wants Tunisia to develop for greater stability and prosperity,” while Qatar, known for its foreign policy outside its neighbors in the Gulf, called for calm on all sides.

The Egyptian government has not yet issued an official statement on the events. The pro-government press in the country preferred to describe the events as “a war against the terrorist organization of Ikhwan.”

Saied, the architect of these steps in Tunisia, backed the decision taken with trade unions and trade organizations after a meeting with them, saying: “I have taken a historic responsibility. Anyone who claims that this is related to the coup should review their legal lessons. We are not coup plotters, but we will not make the Tunisian State an easy game.”

“I don’t want a single drop of blood to flow,” he said, arguing that he made his decisions within the framework of the Constitution and applied the laws, while noting “there is a law in the country, and it applies to everyone.”

Mechichi, who was sacked by Saied, said he would hand over his powers to the new prime minister appointed by the president, noting that he would not take on a blocking role that complicates Tunisia’s situation.

So far, there have been no waves of arrests of politicians or dissidents in the country and no casualties.

Saied is expected to present a roadmap within a 30-day framework, announcing that he has made his decisions within this process. However, it seems difficult to convince and involve Ennahda in the process.

The stance that will be taken by the Ennahda Movement and the front that opposed Saied’s attempt will be a determining factor in how much Saied will make concessions to convince them, as well as shaping the future of the country.

While all this political instability continues in the country, Tunisia has been going through a rough coronavirus-related process in which the health sector came to the point of collapse. In Tunisia, which is deprived of basic tourism revenues, which is basic foreign currency input, the economy also contracted by 3% in the first quarter of 2021. The official unemployment rate stands at 17.3%, while the unofficial rate is much higher.

Public debt, recorded as $30 billion in 2020, is expected to rise to $35 billion in 2021, according to official figures. It is feared that political instability in the country will exacerbate the entire economic picture.