TurkishPress
Home News ‘Truth will be out': China after US rebuke on COVID-19 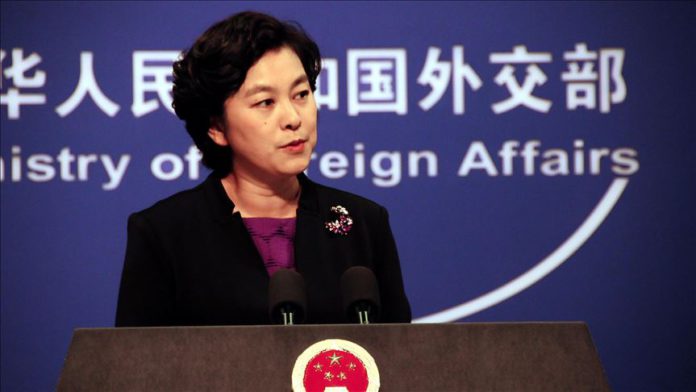 “Truth will be out,” said China Tuesday replying to the US State Department spokeswoman’s tweet about COVID-19 origins.

“Obviously it is not China that preferred saving face over saving lives. For the US, anything that doesn’t help cover up its lies is either disinformation or propaganda & couldn’t possibly be facts. But truth will [be] out,” said China’s Foreign Ministry Spokeswoman Hua Chunying on Twitter.

The statement by Beijing came after the US State Department Spokeswoman Morgan Ortagus questioned China allowing a US media house to visit a Wuhan laboratory.

“@NBCnews was granted the first independent media access to the Wuhan lab, and what do they have to show for it? They just regurgitated  the Chinese Communist Party propaganda and didn’t press for facts,” Ortagus said on Twitter.

The US-based NBC News Monday ran a special news story “Inside the Chinese lab central to the search for the coronavirus’ origin”.

The Wuhan Institute of Virology has invited focus of “speculation and conspiracy theories” magnified by the White House on whether the coronavirus leaked from the facility.

The coronavirus, which has affected more than 20 million people and has spread to 188 countries and territories, was first reported in Wuhan, the capital of China’s central Hubei province last December.

“We have been targeted as a scapegoat,” Wuhan Institute of Virology Director General Wang Yanyi told NBC News.

The origin of the deadly virus which killed more than 736,250 people in the past nine months has remained a mystery.

Ortagus asked NBC News in another tweet: “Did you ask the CCP [Communist Party of China] why they  failed to share info about  the virus, censored their own scientists, and  delayed access by  the international community  seeking answers? We don’t know what happened because the CCP preferred saving face over saving lives.”

The US is leading with the most confirmed coronavirus infections at 5,085,821 followed by Brazil with over three million cases and India with more than two million.

China’s Chunying replied to Ortagus: “No one could change rotation of the Earth. It’s only imagination that the US can forever stay in the light & China in the dark.”

She added that a State Department cable sent in January 2018 on US Embassy officials’ visit to Wuhan Institute of Virology was “used as evidence that the virus came from Wuhan”.

“But the fact is the visit took place two months later without tour of labs or discussion about biosafety procedures,” the Chinese Foreign Ministry spokeswoman said.

Mystery still prevails about the origin

While the US and its allies, including Australia, have insisted on probe into the origins of the deadly infection, a team of World Health Organization experts recently visited China where they interacted with scientists to study the transmission of COVID-19 from animals to humans. Beijing confirmed the visit but said such expert visits will be held across the world.

If Amazon falls, we will all fall: Indigenous advocate

UK thanks Turkey for medical aid amid COVID-19 outbreak