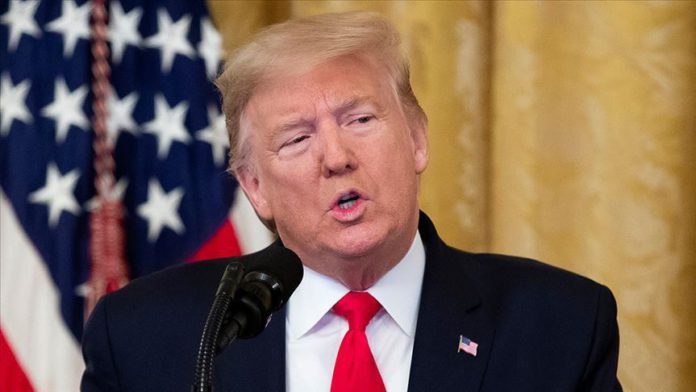 US President Donald Trump on Monday indicated he would be supportive of efforts to expand in-person voting for the legally scheduled Nov. 3 elections, but continued to campaign against universal mail-in balloting.

The president has repeatedly sought to portray universal mail-in balloting by mail as subject to fraud, but has not done so with absentee voting in which a ballot can be sent by mail to voters and they can return it via the US Postal Service.

Today, Trump threw his support behind the idea of expanding Election Day to run through multiple days and a bevy of other proposals.

It would take an act of Congress to change Election Day, which is scheduled under US law to take place on the first Tuesday after the first Monday in November.

Nine states and the District of Columbia have instituted plans to mail all registered voters ballots, with most adopting the plan due to the coronavirus pandemic and concerns voters will not turn out to polling stations out of health concerns. Most of the other states allow voters to request ballots by mail.

The US continues to find itself in the thick of its outbreak with over 5.4 million confirmed cases and over 170,000 COVID-190-related fatalities, according to data compiled by Johns Hopkins University.

Trump acknowledged last week that he opposes providing additional funding to the Postal Service as part of a coronavirus stimulus bill, because it would help to institute universal mail-in voting. But he later backtracked on the stance, saying he would approve the item if Democrats relented on other items in negotiations.

The president stressed his effort to rein in the mail delivery service is motivated by what he says is decades of failure, adding: “We simply want to MAKE THE POST OFFICE GREAT AGAIN, while at the same time saving billions of dollars a year for American Taxpayers. Dems don’t have a clue!”

The Democratic-controlled House of Representatives is reportedly set to return from its August recess on Saturday to vote on legislation to force the Postal Service to halt its plans to implement cost-saving measures as it prepares to deal with a torrent of mail-in ballots ahead of Nov. 3.

House Speaker Nancy Pelosi implored Congress in a Dear Colleague letter to back the legislation, which is being formulated by Oversight and Reform Committee Chairwoman Carolyn Maloney.

“Alarmingly, across the nation, we see the devastating effects of the President’s campaign to sabotage the election by manipulating the Postal Service to disenfranchise voters,” she wrote.

“Postmaster General Louis DeJoy, one of the top Trump mega-donors, has proven a complicit crony as he continues to push forward sweeping new operational changes that degrade postal service, delay the mail, and – according to the Postal Service itself – threaten to deny the ability of eligible Americans to cast their votes through the mail in the upcoming elections in a timely fashion,” she added.