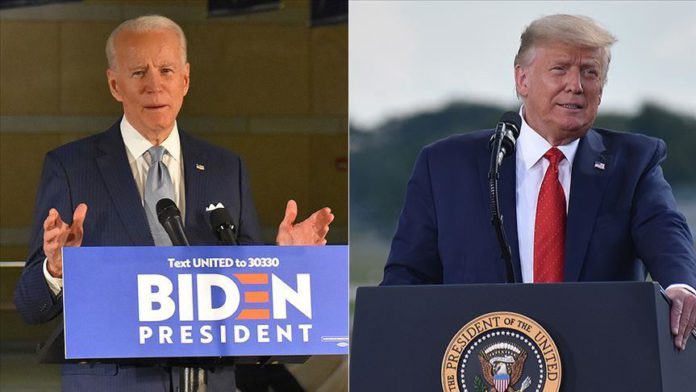 Americans are preparing to choose their next president on Nov. 3 in a year dominated by the coronavirus pandemic and the gravest global economic recession since the Great Depression.

The economy will be the top deciding factor at the polls, with 79% of registered voters considering it “very important” in choosing who to vote for, according to a study by the Pew Research Center released on Aug. 13. Second comes healthcare, which 68% of voters consider important. While Supreme Court appointments come third for 64%, the coronavirus outbreak comes fourth for 62% of voters.

While President Donald Trump has white working-class voters to thank for sweeping him into office in 2016, he also increased the income of middle-class. Real median household income, amount earned by those in middle of population, rose to $65,084 in July 2019, which was an increase of $4,144, or 6.8%, since he took office. By contrast, median household income rose by some $1,000 during his predecessor Barack Obama’s time in office.

Joe Biden, the country’s 47th vice president who served during President Obama’s two terms from 2009-2017, is also trying to focus his campaign on the American middle class, as his vision aims to include all races and ethnic groups in his middle class-focused policies.

“Recovery will require long-term changes to build a more inclusive and more resilient middle class, and a greener and more resilient economy,” he wrote on April 9 in an outline on his campaign website. “This country wasn’t built by Wall Street bankers and CEOs and hedge fund managers. It was built by the American middle class.”

It is unclear how much support Biden will find with a largely inclusive yet vague vision, but he is attempting to tackle two major areas — health and education — with new initiatives.

In the world’s largest economy, where health services are regarded as a commodity rather than a social right, the rate of those uninsured rose to 8.5% in 2018. But health issues have become more significant amid the COVID-19 pandemic as millions of Americans, especially the elderly, deal with high-cost medications.

Biden wants to lower the age of eligibility for the country’s only national health insurance program, Medicare, to 60 from 65, expand its coverage and negotiate drug prices with manufacturers to reduce the cost of prescription drugs. He also aims to expand Obamacare to have 97% of Americans insured, but this would cost $750 billion over the next 10 years.

Trump signed an executive order Sunday to lower prescription drug prices, but it is unlikely to have any immediate impact. For Medicare, he called for a temporary payroll tax deferral plan which could cause higher tax bills for workers in 2021.

In the 2016 presidential election, Trump as a candidate promised to repeal Obamacare, also known as the Affordable Health Care Act, but has failed to kill the 2010 comprehensive health care reform law during his time in office. The US Supreme Court will hear a new case against the program on Nov. 10, a week after the election.

As of Monday, the combined costs of Medicare and Medicaid, the second-largest US budget item, stood at $1.3 trillion, or 6.6% of the country’s gross domestic product (GDP) of $19.5 trillion — the total market value of the goods and services produced within the US in a year, according to usdebtclock.org. Total student loan debt stood at over $1.7 trillion, or 8.7% of GDP.

As the US economy struggles to bring the unemployment level below 10%, it is even harder for new graduates with no experience to find jobs, let alone pay off their loans. Student loans, which take fresh graduates decades to pay off after finding a job, also hold back consumer spending and become an obstacle for economic recovery.

For loans and repayment, Biden’s plan appears to be softer for students. He proposes to immediately cancel a minimum of $10,000 of student debt per person, while they would pay 5% of their discretionary income toward their debt and the remainder of federal student loans will be forgiven without any tax burden after 20 years.

Trump’s plan, on the other hand, includes 12.5% payment of discretionary income toward debt with forgiveness after 15 years for undergraduates and 30 years for graduate students, according to his 2020 fiscal year budget proposal.

Benjamin Franklin, one of the Founding Fathers of the US, had once said there are only two things certain in life: death and taxes. The latter will determine how fast the US economy will emerge from the abyss of recession.

Biden aims for a progressive tax code that he believes will promote higher economic growth with higher taxes for the wealthy and businesses. By raising taxes, he projects an increase of some $4 trillion in additional government revenue over the next decade, which then could be used to provide better health and other services for the US public.

The former Democratic Senator from Delaware, the state where the sales tax on consumers is zero, wants to roll back some of Trump’s tax cuts by returning the top income tax rate back to 39.6% from its existing 37% and increase the top corporate income tax rate to 28% from 21%.

While raising taxes during an economic downturn would initially hurt spending and investments, Trump claims Biden’s economic policies would end economic growth and result in a “total contraction.” Due to COVID-19, US economy contracted by 5% in first quarter of 2020, and by 31.7% in second quarter — worst on record.

After Trump took office in early 2016, he offered massive tax cuts to accelerate growth and expedited deregulation for Wall Street and the banking industry which resulted in higher profits for firms, record-high levels in equity markets and an annual growth rate close to 3% but below Trump’s 4% target.

It is almost certain that Trump will continue his trade war against China, and given that he holds Beijing responsible for the widespread of COVID-19, some topics in Sino-American trade relations are expected to become more heated issues such as global healthcare, Chinese firms like TikTok operating in the US, intellectual property rights and 5G technology.

Although Biden’s campaign advisor Kurt Campbell indicated the Democratic Party has acknowledged that Trump was “accurate in diagnosing China’s predatory practices,” Biden is expected to adopt a different strategy that would neither end the trade war nor escalate tensions with China.

Biden’s approach, many experts believe, would involve more cooperation rather than confrontation with Beijing as the world’s two biggest economies would try to tackle issues such as the global recession, COVID-19 and climate change.

Trump, however, differs on that, saying on Sept. 7 that “if Joe Biden becomes president, China will own the United States…I have taken in billions and billions of dollars from China and given much of it to farmers, manufacturers and the US Treasury…They targeted our farmers and I targeted them. I gave $28 billion to our farmers.”

When it comes to Midwest rural America, Trump won the hearts of farmers and coalminers in the 2016 election when he managed to sweep eight of the top nine coal producing states in the US.

Energy is one of the key areas where Biden and Trump differ the most. While the former, under Obama, has favored green initiatives, he still wants to “build a more resilient, sustainable economy to achieve net-zero emissions by no later than 2050,” while Trump withdrew the US from the historic Paris climate agreement in 2017.

“Just as with COVID-19, Donald Trump has denied science and failed to step up in the face of the climate crisis…He has held back American workers from leading the world on clean energy, giving China and other countries a free pass to outcompete us in key technologies and the jobs that come with them,” Biden wrote in a statement on clean energy.

With the recent exception of a massive solar plant, Trump mostly favored coal, oil and natural gas industries to “unleash an energy revolution” in the US, and he also offered leases in the Arctic and US coastal waters for offshore drilling at the expense of potential environmental disasters. In 2019, 80% of US energy production came from fossil fuels, according to the Energy Information Administration (EIA).

Since Trump took office, however, US crude oil production soared more than 40% from 9.1 million barrels per day (bpd) in February 2017 to a record high of almost 12.9 million bpd in November 2019, the EIA data shows. The US surpassed Saudi Arabia and Russia in crude output in late 2018 to take the top spot, substantially reducing its decades long dependence on foreign resources.

Trump administration on May 11 provided final approval for $1 billion Gemini Solar Project that will extend across 7,100 acres (28.7 square kilometers) in the Mojave Desert across southeastern California and southern Nevada. The largest solar project in US history, and the eighth largest in the world, is expected to produce 690 megawatts of electricity, which will power 260,000 households in states of Nevada, Arizona and California, and offset greenhouse emissions caused by 83,000 cars every year.

COVID deaths of those over 80 in England, Wales down by...