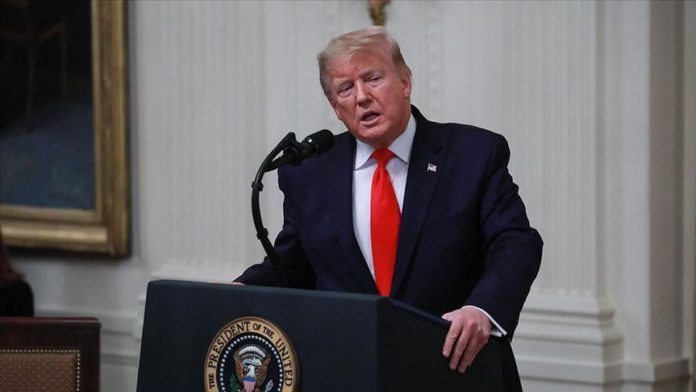 US President Donald Trump threatened Wednesday to hold up federal funding to Michigan and Nevada because of mass mail-in-vote efforts in those states amid the coronavirus.

“Breaking: Michigan sends absentee ballots to 7.7 million people ahead of Primaries and the General Election. This was done illegally and without authorization by a rogue Secretary of State,” Trump said on Twitter.

“I will ask to hold up funding to Michigan if they want to go down this Voter Fraud path!..” he wrote.

Trump’s threat came after Michigan’s Secretary of State Jocelyn Benson announced Tuesday all registered voters in the general election will be mailed an application to vote by mail in November.

“By mailing applications, we have ensured that no Michigander has to choose between their health and their right to vote,” said Benson.

Trump also blasted Nevada’s plan for mail voting for its primary in June.

“State of Nevada ‘thinks’ that they can send out illegal vote by mail ballots, creating a great Voter Fraud scenario for the State and the U.S. They can’t!” the president said in a separate tweet. “If they do, “I think” I can hold up funds to the State. Sorry, but you must not cheat in elections.”

As many states search for a safe way to hold the November elections amid the coronavirus pandemic, Democrats are pushing to expand vote-by-mail to secure social distancing guidelines. But the idea drew fire from Trump, claiming it promotes fraud.

The US is the country hardest-hit by the global pandemic with more than 1.5 million cases and nearly 92,000 fatalities, according to a running tally of Johns Hopkins University. Overall, nearly 290,000 people have recovered from the virus in the country.