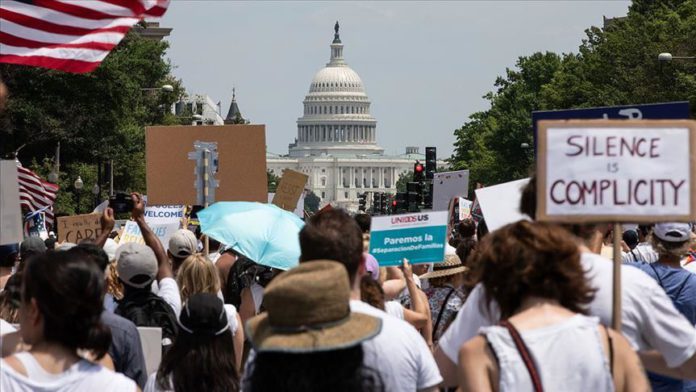 US President Donald Trump signed a memorandum Tuesday ordering undocumented migrants not be counted in the 2020 census for purposes of seat reapportionment in the House of Representatives.

The order, which immediately prompted legal challenges, is Trump’s latest effort to clampdown on immigration in the US ahead of the November election.

It comes in the wake of the Supreme Court’s decision last year to bar him from adding a citizenship question to the survey that is given every 10 years, calling his rationale apparently “contrived.”

Trump said his order is pushback against what he calls the “radical left,” falsely accusing liberals of “trying to erase the existence of” citizenship and attempting to “conceal the number of illegal aliens in our country.”

Non-citizens are not granted the right to vote in the US.

The census is used to ascertain the true number of people living in the US regardless of legal status so that resources can be adequately apportioned. It is also used to establish the number of seats each state receives in the House of Representatives where states are granted representation on the basis of population.

Trump said in his order that “respect for the law and protection of the integrity of the democratic process warrant the exclusion of illegal aliens from the apportionment base, to the extent feasible and to the maximum extent of the President’s discretion under the law.”

It makes note specifically of “one State,” which it says is “home to more than 2.2 million illegal aliens, constituting more than 6 percent of the State’s entire population.”

The order is likely referring to the solidly Democratic state of California.

The American Civil Liberties Union was quick to vow a legal challenge to Trump’s order, calling it “patently unconstitutional.”

“The Constitution requires that everyone in the U.S. be counted in the census,” Dale Ho, the director of the advocacy group’s Voting Rights Project who successfully argued the citizenship question case before the Supreme Court, said in a statement.

“President Trump can’t pick and choose. He tried to add a citizenship question to the census and lost in the Supreme Court. His latest attempt to weaponize the census for an attack on immigrant communities will be found unconstitutional. We’ll see him in court, and win, again,” he added.