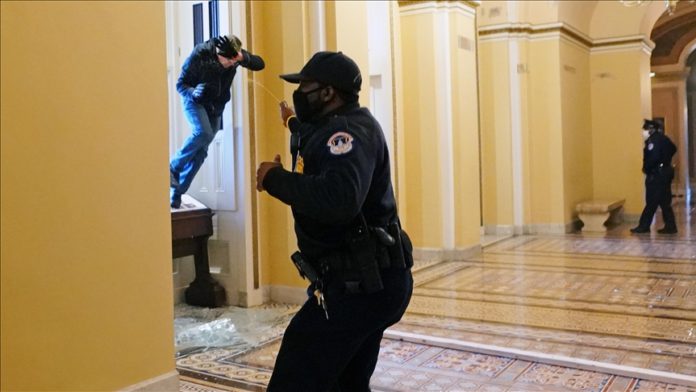 The US Senate recessed an Electoral College debate Wednesday after angry supporters of President Donald Trump stormed the Capitol building, forcing a lockdown by police.

Protestors broke glass windows to one of the entrances to the building in an attempt to enter, according to a video shared by The National News reporter Joyce Karam.

The incident happened an hour after Pence announced that he rejected Trump’s demand that he interfere in Congress’s counting of Electoral College votes.

The largely pro forma meeting will eventually declare President-elect Joe Biden the winner of the Nov. 3 presidential contest, although it will be significantly dragged out as some Republicans in the House of Representatives and the Senate raised objections.

Trump took to his favorite medium to express disappointment with his vice president.

“Mike Pence didn’t have the courage to do what should have been done to protect our Country and our Constitution, giving States a chance to certify a corrected set of facts, not the fraudulent or inaccurate ones which they were asked to previously certify,” he wrote on Twitter. “USA demands the truth!.”

He urged protestors to support security forces and remain peaceful.

“Please support our Capitol Police and Law Enforcement,” Trump said. “They are truly on the side of our Country. Stay peaceful!”