TurkishPress
Home Americas US & Canada Trump: Some deaths are possible while US reopens 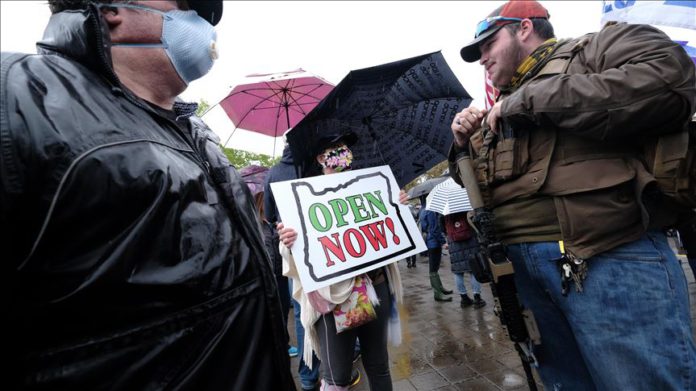 President Donald Trump said Tuesday “it’s possible” that some people will die in the US when coronavirus restrictions are loosened.

He was speaking in an exclusive interview with ABC News in the state of Arizona, where he toured a mask-making plant, his first visit after largely being confined to the White House for the past two months.

“It’s possible there will be some [deaths] because you won’t be locked into an apartment or a house or whatever it is,” Trump said.

“We have to get our country back. You know, people are dying the other way too,” he said, noting the virus restrictions had led to drug overdoses and suicides.

“Take a look at what’s going on. People are losing their jobs. We have to bring it back, and that’s what we’re doing,” he added.

Many states are beginning the process of reopening. But while the virus has been waning in its original epicenter of New York City, it has been growing in other areas the country, and fears have mounted that the reopening long sought by Trump could lead to a resurgence of cases and deaths.

As of Tuesday, more than 70,000 people in the US had died and over 1.2 million are infected by COVID-19, the respiratory disease caused by the virus, according to data being compiled by Johns Hopkins University.