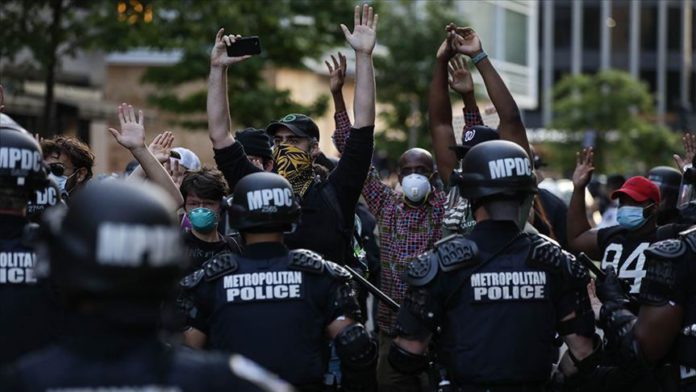 US President Donald Trump signed an executive order Tuesday he said is an effort to bring significant reform to law enforcement following weeks of unrest in the wake of the fatal arrest of George Floyd.

Floyd, a 46-year-old black man, died in police custody after he was pinned to the ground by a white Minneapolis, Minnesota police officer with his neck compressed by the officer’s knee for nearly nine minutes. The city has since banned chokeholds and neck restraints, and the majority of its City Council has expressed a desire to disband the police force altogether.

Trump said in the Rose Garden he had just spoken with the families of those who lost loved ones in fatal encounters with police, adding “I could never imagine your pain or the depth of your anguish, but I can promise to fight for justice for all of our people.”

“In order to make real progress on public safety we have to break old patterns of failure,” Trump said.

Trump said his order will ban police from using chokeholds “except if an officer’s life is at risk,” as part of a wider effort to incentivize police departments to adopt nationwide standards. Those that choose to be certified by independent credentialing bodies would be eligible to receive Department of Justice grants under Trump’s order.

“These standards will be as high, and as strong as there is on earth. The vast majority of police officers are selfless and courageous public servants. They are great men and women,” Trump said, framing his order, which he signed while flanked by officers, as an alternative to the growing chorus of calls to defund or dismantle police departments.

Trump has consistently sought to portray himself as a “law and order” president amid the protests, strongly speaking out against violence and looting that have occasionally dotted the otherwise peaceful mass demonstrations.

In addition to incentivizing nationwide policing standards, Trump’s order would create a database to track officers with excessive force complaints so they cannot easily transfer between departments without the records being fully available.

It would encourage police departments to adopt what it is calling “co-responder programs” that includes having social workers accompany officers responding to non-violent calls to better help in situations involving mental illness, homelessness and addiction.

Democrats, however, were unswayed by Trump’s announcement after unveiling their plan last week to reform law enforcement.

Senate Minority Leader Chuck Schumer said Trump’s “modest” order does not “make up for his years of inflammatory rhetoric and policies designed to roll back the progress made in previous years.”

“This executive order will not deliver the comprehensive meaningful change and accountability in our nation’s police departments that Americans are demanding,” the Senate’s top-ranking Democrat said in a statement. “Congress needs to quickly pass strong and bold legislation with provisions that make it easier to hold police officers accountable for abuses.”

The reform package announced by House and Senate Democrats, known as the Justice in Policing Act, goes much further than the president’s action.

The sweeping legislation, spearheaded by the Congressional Black Caucus, would bring with it massive reform to law enforcement if passed. Among its provisions are a ban on chokeholds, creation of a federal database to track police misconduct and mandated use of body cameras nationwide.

It would also significantly curtail what is known as qualified immunity, a legal framework that has a very high threshold for prosecuting officers accused of misconduct. Critics and protesters say it makes it near impossible to hold police accountable in court.

Derek Chauvin, the fired Minneapolis police officer seen kneeling on Floyd’s neck, has been charged with second-degree murder in the case. The three other officers who were at the scene have also been charged.

Minnesota Attorney General Keith Ellison, a former congressman, has noted the uphill battle before prosecutors as they prepare for what is going to be a difficult task in court.

“We’re confident in what we’re doing, but history does show there are clear challenges here,” Ellison said.