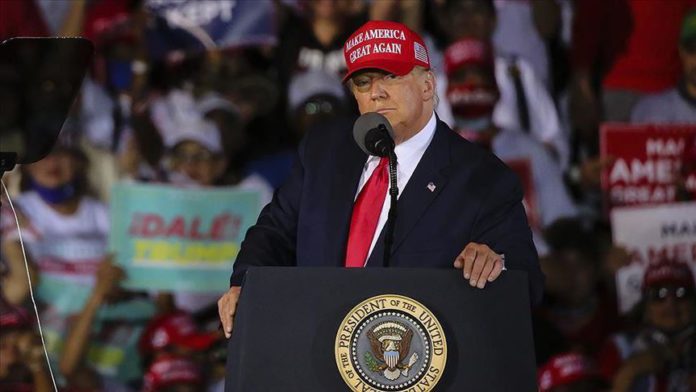 US President Donald Trump said Tuesday that he does not a have a concession or acceptance speech prepared, as Election Day voting is underway in 50 states.

Trump’s remarks came at the Republican National Committee’s annex in Arlington, Virginia, in response to a reporter’s question whether he has written a speech of acceptance or concession.

“No, I’m not thinking about concession speech or acceptance speech yet,” he said.

“Hopefully we’ll be only doing one of those two and you know, winning is easy. Losing is never easy. Not for me, its not.”

Trump also stressed that the victor of the polls should be clear on Election Day, criticizing again a Supreme Court decision regarding Pennsylvania mail-in-ballot rules on Monday.

“You have to have a date, and the date happens to be November 3,” he said. “And we should be entitled to know who won on November 3.”

In a late Monday tweet, the president slammed the high court’s decision to allow Pennsylvania officials to count ballots postmarked.

“The Supreme Court decision on voting in Pennsylvania is a VERY dangerous one. It will allow rampant and unchecked cheating and will undermine our entire systems of laws. It will also induce violence in the streets. Something must be done!” he wrote.

Early Tuesday, Trump denied speculations that he would try to claim the crown prematurely, saying he will declare victory “only when there’s victory.”

“There’s no reason to play games. I look at it as being a very, a very solid chance of winning here. I don’t know how they rate the chances,” Trump told TV show Fox and Friends in one of his signature call-in interviews.

Democrat Joe Biden is favored to win in most election models of corporate polling companies, but observers have warned that mail-in ballots expected to lean towards Biden may be counted after in-person ballots thought to lean towards Trump, which may give the impression of a Trump victory before all votes could be counted.

Axios reported Sunday that Trump is planning to declare a premature victory Tuesday night if it appears that he is ahead in the race for the White House even if vote counting is still underway and key states have not been called. Trump immediately labelled it as another ”false” report.

Following the report, Twitter said Monday it will add a warning label to any posts that prematurely declare a victor in the US presidential and congressional elections.

Republicans, including the president, have long blasted the social media and certain big tech companies for taking sides with the Democrats and interfering in the course of US elections.

Trump also thanked his supporters in an Election Day message, in which he said: “To all of our supporters: thank you from the bottom of my heart. You have been there from the beginning, and I will never let you down.”

“Your hopes are my hopes, your dreams are my dreams, and your future is what I am fighting for every single day!” he added.

For his part, Biden asked for voters to trust him as they did when he was the running mate of previous President Barack Obama.

“In 2008 and 2012, you placed your trust in me to help lead this country alongside Barack Obama. Today, I’m asking for your trust once again — this time, in [Senator] Kamala [Harris] and me. We can heal the soul of this nation — I promise we won’t let you down,” he tweeted.

Biden also paid a visit to St. Joseph’s church on the Brandywine in Delaware with his wife Jill and two of his grandchildren on Election Day morning.