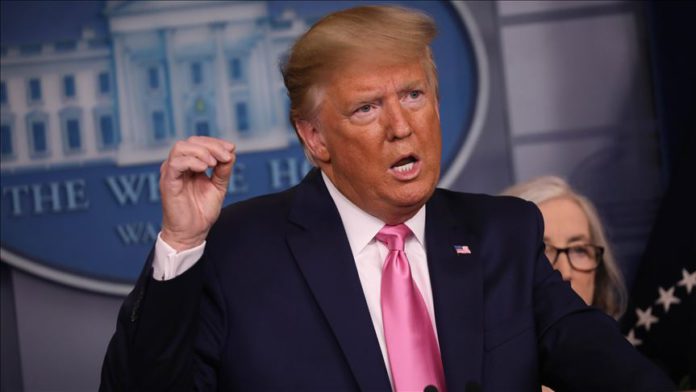 US President Donald Trump claimed Thursday that he has seen evidence that the novel coronavirus originated in a laboratory in Wuhan, China.

Asked if he has seen anything that gives him a “high degree of confidence” that the Wuhan Institute of Virology was where the virus had originated from, Trump replied: “Yes, I have.”

His remarks came hours after the Office of the Director of National Intelligence (DNI) said the US intelligence community does not believe the coronavirus is “manmade or genetically modified.”

Speaking at a White House press conference, Trump attacked the World Health Organization, claiming it is serving China’s interests as the coronavirus continues to spread around the world.

“The World Health Organization should be ashamed of themselves because they are like a public relations agency for China,” Trump told reporters.

He said the US pays the WHO almost $500 million a year while China pays only $38 million and claimed the organization has failed to save lives.

“They should not be making excuses when people make horrible mistakes that are causing hundreds of thousands of people around the world to die,” said Trump.

Trump accuses the international body of mismanaging and covering up the spread of the coronavirus and cut funding to the WHO in mid-April.

He said the WHO is “China-centric,” maintaining it had been the source of poor information for governments worldwide, particularly its opposition to countries closing their borders to China after the virus emerged there in December.

The coronavirus continues to spread in the US, claiming over 62,000 lives. More than one million are infected, according to Johns Hopkins University data.

After originating in Wuhan, China last December, COVID-19 has spread to at least 187 countries and regions. Europe and the US are currently the worst-hit.

The pandemic has killed over 232,800 worldwide, with more than 3.27 million infections, while recoveries now exceed one million.